By MATT HURWITZ The Associated Press 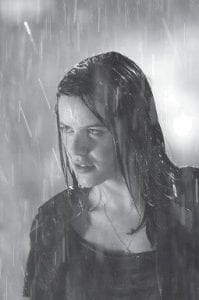 Lindsay Wagner never had to use jujitsu or save Canada from Bosnian terrorists – or worry about her boss watching her take a shower through her bionic eye.

Today’s “Bionic Woman” is one superhuman leap from the now-seems-tame series of the 1970s.

A spinoff of the hugely popular 1970s series, “The Six Million Dollar Man,” the original starred Wagner as Jamie Sommers, the female recipient of some high-tech replacement parts who went on secret missions to stop bad guys.

But the similarities with the new show stop there (her name is even spelled differently – it’s “Jaime” now).

“She’s the girl next door whose ability to kick your ass you don’t see coming,” says executive producer David Eick of his vision for the character.

Known for reinventing the classic space series “Battlestar Galactica” into a current hit for the Sci FiChannel, Eick wanted to give the new series a different twist.

After tossing around an idea for a show about a female crime boss, he decided to change his anti-hero to a hero and wrap the idea around the “Bionic Woman” title after several unsuccessful attempts had been made by other networks to bring the series back to life.

Unlike the original, Eick envisioned “a younger person, who, like Spider-Man’s Peter Parker, had these unique abilities hoisted upon her without asking for them, and then have her personal life be in constant competition with her newfound abilities.”

Sommers’ personal life consists mainly of watching over teenage sister Becca, for whom she’s now responsible following their parents’ split. The difficulty lies in the fact that, for the sake of her sister’s safety, she must keep her secret activities just that, a secret.

“Becca’s really at the center of it all for Jaime,” notes Michelle Ryan, the 23-year-old London-born actress who portrays Sommers. “She’s off doing these missions, but it’s Becca’s needs and issues that keep Jaime grounded and real.” Adds series co-star Isaiah Washington, who portrays Sommers’ mentor, Antonio Pope: “It’s what I call a ‘perfect imbalance’ – trying to figure out this new underground world, and still be the big sister at home.”

Though she started the series wandering through life as a young bartender, Sommers is now a “consultant” with the ubiquitous Berkut Group, a clandestine organization that fixes problems that can’t be handled by the police, military or FBI.

“We’re told we’re contracted by private citizens who want to see a world in which their children and grandchildren can grow up,” explains Miguel Ferrer, who plays Berkut chief Jonas Bledsoe.

Ferrer’s charge, Sommers, after suffering a near deadly auto accident, has had her legs, one arm, an eye, and one ear replaced with bionics – though not in a 1970s mechanical way.

Part of the challenge, says Eick, was “we only had the rights to the show’s title and the character’s name, but, legally, we couldn’t depict mechanistic technology that involved parts being placed on the body.”

The solution lay in the use of “anthrocytes” injected into Sommers’ blood to regenerate the missing parts, instead of replacing them.

“They’re nanobots,” Eick explains. “They’re just microscopic anatomical machines in your body that you don’t feel or aren’t aware of. It’s like having cells with brains.”

The regenerated limbs give Sommers unusual strength and agility, something she needs when practicing the rough-andtumble martial arts performed in the show by several members of the cast.

Helping her put her new fighting tools to work are Jae Kim (Will Yun Lee) and Pope (Washington).

“She has a hard time, because she’s still a wide-eyed young lady, and still wears her heart on her sleeve,” says Washington. “So he has to infuse in her an understanding of what teamwork means, and how to operate off of instinct and be laser sharp. Because if you don’t perform well, if you have a bad day, someone dies.”

Since the beginning of the series, Sommers has slowly been growing into her role as a “weapon,” and boss Bledsoe has slowly moved from seeing her simply as a $50 million investment to a very human member of his team.

“He’s beginning to warm up to Jaime,” Ferrer explains of his character. “It’s inferred that Jonas had a poor relationship with his own daughter, so he’s reluctantly becoming sort of a surrogate father to Jaime. Which depresses the hell out of me,” the 52-yearold Ferrer says. “I’m a father now to some hot chick? Ugh.”