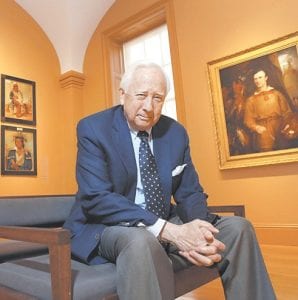 Historian and author David McCullough’s latest work of history, “The Wright Brothers,” was released on May 5. (AP Photo)

David McCullough’s latest work of history followed a spontaneous path, from a book about many Americans in Paris in the 20th century to the biography of just two.

“Among the people I turned up were the Wright brothers, and it just astonished me that they were even in France, let alone that it had an important part to play in their story,” says the two-time Pulitzer Prize winner, a Boston resident visiting New York to promote “The Wright Brothers,” which came out this week.

“Just reading about them, I realized how much more interesting they were, how much more compelling than I had any idea. And I thought, ‘No, this is the book.’”

The 81-year-old McCullough was interviewed recently in a private study at the Yale Club in Manhattan, a favorite setting for the Yale alumnus. He sees “The Wright Brothers,” already optioned by Tom Hanks for a planned miniseries, as the last of an unofficial “trilogy of accomplishment,” following his landmark “The Great Bridge” about the Brooklyn Bridge and “The Path Between the Seas” about the Panama Canal. Paris is part of the Wrights’ story because they at first received more support from the French than from the Americans. McCullough also traces their childhood in Ohio, their devoted parents and Wilbur’s relentless self-education, the bicycle shop where they first revealed their mechanical genius and the 1903 flight at Kitty Hawk, North Carolina, that later allowed them to claim honors as the first successful pilots (McCullough dismisses recent claims by Connecticut officials that a resident of their state, Gustave Whitehead, was the real pioneer).

One of the world’s most popular and honored historians, Mc- Cullough has written about presidents, Paris, bridges and natural disasters. But he sees common themes and approaches in his work. His first book, “The Great Flood,” was about the 1889 Johnstown Flood in Pennsylvania and was successful enough that he feared he would be labeled “Bad News” McCullough. So starting with “The Great Bridge,” published in 1972, he picked narratives defined by what is achieved and not lost.

He also insists on starting with a subject he knows little about.

“And that’s something my academic friends find hard to understand,” he says. “Because they’re experts on a given era or a given group of people or an idea. I don’t want to be an expert. Experts have all the answers; I have questions.”

McCullough is not a trained scholar and has a hobbyist’s background in aviation. As a child he built model airplanes and flew them, and watched them quickly descend, from the third floor of his house. He also took flying lessons in the 1960s, as many as he could afford to at the time.

At first, he knew little more about the Wrights than did his editor at Simon & Schuster, Bob Bender, who confides in a reader’s note in “The Wright Brothers” that he couldn’t tell which brother was which (Short answer: Orville wore a mustache, Wilbur didn’t). McCullough educated himself through reading and travel, visiting Kitty Hawk, Paris and other sites of their early experiments and looking through thousands of pages of letters and diaries.

“Five years ago, I knew only the same basic things most people did, that they were bicycle mechanics from Ohio and that they invented the airplane,” he says.

His research enabled him to beat the experts and crack a longtime mystery about the Wrights, involving a hockey stick that changed young Wilbur’s life.

When Wilbur Wright was a teenager, he was smashed in the face by a hockey stick while playing on a frozen lake, knocking out several teeth. The injury sent him into a depression so severe that he abandoned plans to attend college and rarely left home over the next few years. But it also made him an intense reader and brought him closer to Orville, whom he joined first to run a printing press, then a bicycle shop, then as collaborators on flying machines.

Until recently, no one knew who wielded the stick. But in reading through the diaries of the Wrights’ father, McCullough discovered that the boy was famous, notorious, in his own right : Oliver Crook Haugh, a neighborhood bully at the time and later executed for murdering his mother, father and brother.

Dr. Tom D. Crouch, a Wright biographer praised by McCullough and a senior curator at the National Air and Space Museum in Washington, D.C., told The Associated Press that he had looked through the diaries while working on his own 1989 book and missed the Haugh entry. Crouch gives McCullough “full credit for being the first to identify Wilbur’s assailant in a Wright biography.”

McCullough tries to connect his books to the present and sees in the Wrights an exemplary case of persistence. They endured numerous failures, humiliations and near-fatal mishaps, including a crash that badly injured Orville and a ferocious mosquito attack that McCullough says would have sent him home “permanently, in absolute horror.”

“There’s an old novelist adage, ‘Keep your hero in trouble,’ and these fellows are in trouble all the time,” he says.

“I was flying to California or somewhere and they came on the loudspeaker and said, ‘We have reached out altitude of 35,000.’ And there I am doing some rewriting of some chapters of these guys and I thought, ‘Whoa, here I am, working on this book and I’m zooming along at 35,000 feet, all with other people who don’t think a thing of it.”