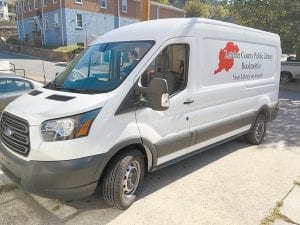 After more than a year without a bookmobile, the Letcher County Public Library District’s new bookmobile has finally hit the road.

The bookmobile has been down since 2015, when the engine blew in the old van, which was more than 20 years old. The library district bought a new one this year, and has been having it customized with bookshelves, flooring and lettering. The work was completed two weeks ago, and bookmobile librarian Legina Adams has been stocking the shelves and preparing it for the road. It made its first official run September 26.

The bookmobile takes books to elderly and handicapped individuals all over the county, and is used for programming at schools and other locations. Residents who were used to the old Bookmobile, which Adams dubbed “Big Blue” because of its two-tone blue and white paint scheme, may not recognize the new one at a distance. While the old bookmobile was a conversion similar to a StepVan or a UPS truck, the new one is more streamlined and much smaller.

The new bookmobile is a white 2016 Ford Transit van with a medium-height roof and a long wheelbase. It carries fewer books than the old bookmobile, but it should be able to travel roads that were too narrow for the old one. The new van is less than 7 feet wide, compared to nearly 8 feet for the old one.