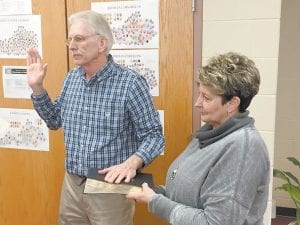 Adams, 62, of Pert Creek, was sworn into office by Craft on Tuesday afternoon. He previously served as law clerk for Craft and former Circuit Judge Sam Wright, who now sits on the Kentucky Supreme Court. Adams became eligible for the circuit clerk’s job on January 26 after he and two other longtime courthouse employees, Mike Watts and Janet Ratliff, passed a special clerk’s examination Craft had authorized them to take in Frankfort.

Watts currently serves as the county’s court designated worker, a job in which he processes complaints against juveniles under 18. Ratliff has served as deputy circuit clerk since Nichols took office in 1989.

Just minutes after Adams took the oath of office from Craft around 4 p.m. Tuesday, Ratliff angrily entered the circuit judge’s office and told Craft she was “very disappointed” with his decision to appoint Adams. She also told Adams she would work to get him defeated should he seek election to the office.

“Don’t get too comfortable, because in two years it’s over,” she said, fighting back tears as her two daughters looked on. “If I had done you the way you did me I would never have heard the end of it.”

Craft’s choice of Adams left former clerk Nichols in tears as she left the judge’s chambers just before Adams was sworn into office.

“He could have avoided this mess if he had just told us the truth,” Nichols said before meeting privately with Craft.

After announcing her retirement, which took effect January 1, Nichols said she believed that Craft would appoint Ratliff to the post, adding that Ratliff had no plans to run for the office during the next countywide election.

After learning of Craft’s decision at about 3:30 p.m. on Tuesday, Ratliff resigned her post as deputy clerk, finalized her retirement papers, and changed her political party registration from Democrat to Republican.

“I’m not going to support a party that would do that to me,” she said.

Speaking after Ratliff left the judge’s office, Adams said he would have welcomed Ratliff to stay on as a member of his staff. He added that if he hadn’t been chosen for the post he would “have been heartbroken but would have been here” the next day working.

Under Kentucky law, Craft, as the chief judge of the Letcher judicial circuit, was left with the task of appointing the successor to Nichols within 30 days of her retirement, which was Tuesday.

Watts, son of the late Ruben Watts, who served as sheriff and judge/executive here several years ago, was angry with Craft on Monday after the judge questioned whether he should recuse himself from the appointment since he had worked with all three of the potential appointees. Watts told The Mountain Eagle he apologized to Craft later on Monday, adding that however the appointment went he would probably be a candidate for the office in two years.

Watts wasn’t in the courthouse when the appointment of Adams was announced, but posted the following statement of the Facebook social media site on Tuesday night:

“I don’t post a lot on here but just wanted to share a little something. My father Ruben Watts always taught me that a man is only as good as his word. He also taught me if you are friends with someone then you stick up for them through thick or thin. Some people believe in putting their self in front of or over anything. I was not brought up this way. My father always put this county and country first. He always wanted to serve people and he did. He fought for this country in World War II and served this county as Sheriff, County Judge, as an educator and as a volunteer for several different organizations. He never put himself first. He always put people before himself and even before us. I’ve always tried to live up to his example. I was taught to treat people the way you want to be treated. When a door closes there is always another one opened. With this said I will continue to let God lead me. I will always keep my Faith in Jesus and wait on Him.”

Just before submitting her resignation, Ratliff sent an e-mail to all of Kentucky’s circuit court clerks asking them to “meet with your legislative representatives and lobby for a change in how vacancies in the clerks’ offices are filled,” adding that “judges should not dictate and control the appointment of this vital office.”

Ratliff told the clerks that Nichols had asked Craft to appoint her “because she was concerned about the continuity of her office and a smooth transition,” and that “Margaret was assured by the Judge that under the circumstances he would do so.”

Ratliff also wrote to the clerks that “rumors are and continue to run rampant,” and that she believes it “is now evident that each of the three of us has been assured that he or she would be appointed clerk.”

“Please believe me that this e-mail is not a case of sour grapes,” she added in the e-mail. “Yes, I would like to have the clerk’s position, but as clerks and deputy clerks I think it is incumbent that the office of the circuit clerk be impartial and that there be no appearance of any type of conflict of interest or impropriety.”

Craft did not comment on the matter, other than to say after Ratliff left his office that, “Everybody has cussed me; they’ve gotten it out of their system. That’s the last I’m listening to it.”

Craft’s wife, Kim, said her husband was left with a tough choice to make among three people he had worked with and been friends with for many years.

“He has tried his best to make everybody happy,” she said, adding that her husband was “not choosing enemies.”