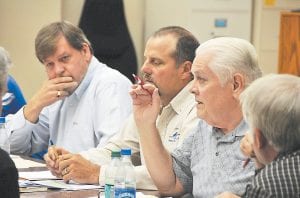 Letcher County citizens probably won’t know who their new circuit court judge will be until next year.

Jr. said this week that the new Letcher circuit judge would most likely be appointed by the governor’s office in early 2016.

Matt Bevin will be sworn in as governor on December 8 and the chief justice’s office will wait for him to establish his office of Boards and Commissions before making the choice for the Letcher circuit, said Katie Shepherd, chief of staff and legal counsel for Minton’s office.

Before Bevin makes the appointment here, he will appoint four citizens — two Democrats and two Republicans — to serve on a Judicial Nominating Commission with two local attorneys and Minton himself. The two attorney members, Jimmy Craft and Gene Smallwood, were elected by local members of the Kentucky Bar Association. Minton serves as the chair of the Judicial Nominating Commission.

The commission will review questionnaires and interview all applicants before recommending three names to the governor. Once given the list of nominees, the governor has 60 days to appoint a circuit judge or the chief justice will appoint a judge from the list of recommendations.

The appointed circuit judge will serve that office until an election can be held.

Once the vote is certified, on November 17, by the Kentucky State Board of Elections in Frankfort, Wright will be sworn in as Supreme Court justice for the district, which consists of Letcher and 21 other counties in eastern Kentucky.

When Wright takes his new office, the Letcher Circuit judge’s seat will officially become vacant. Minton’s office will send a notice of the vacancy to all local attorneys. Attorneys may then nominate themselves or recommend another attorney to fill the vacancy created by Wright.

In 2009, citizens Linda Bailey, Bennett Combs, G.C. Kincer and Tina Whitaker along with attorneys James Asher and Jimmy Craft served on a Judicial Nominating Commission that recommended James A. Hubbard, Kevin Russell Mullins and Frank Richard Riley III for the vacancy in the Letcher district judge’s office that was created after Judge James T. Wood Jr. resigned in January 2009 to join the Senior Judges Program.

The four-year terms of those citizen members have expired. Citizens interested in serving on the next commission may send applications to the Office of Boards and Commissions. Applications are available online at governor.ky.gov/ office/pages/bc.aspx. Applicants cannot hold a public office.