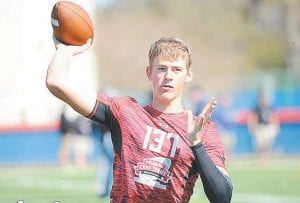 Florida quarterback Mac Jones tries to make sure he doesn’t post anything “stupid” on social media. He says he still plans to keep his commitment to the Wildcats.

“I just think you see a very energetic guy that brings credibility. He played in the NFL, was one of the great college football players. He has a great presence about him, does a great job in recruiting,” said Stoops.

Junior receiver Garrett Johnson watched an ESPN special on Thomas, who played for Miami and set a school record for receptions before going on to play eight years in the NFL. He was an assistant coach at Hampton, Western Kentucky and Louisville before coming to Kentucky after the 2015 season.

“To see him joke around and having fun with us is great. You can see he knows the game and it just makes you want to be engaged even more. His coaching style is great,” Johnson said. “The swag he has, receivers love. But of course, winning has to happen. The little swag is just to get you going to get those wins we need.”

That’s what Thomas believes he can do by helping Kentucky’s receivers become more productive. Recently he offered these insights on the program.

Question: Is tough love a fair explanation of how you coach?

Thomas: “I enjoy coaching. These kids, man, some of them need some tough coaching but they also need somebody to let them know they care. As a player, that was important to me. I played for a coach that could get on me real hard, but I knew that he cared for me. I try to use that philosophy because kids do better. You can be tough and get on them all you want as long as they know you care about them.”

Question: Is that hard to do with a group of players you have not known but a few months?

Thomas: “My personality helps. I am outgoing person. I really enjoy the game. The game has been very good to me and I try to pass on that passion to these players and let them know if you do what you are supposed to do this game could be get to you also. I try to get them to understand that you are here to become a better man and grow as a person. If you do that, you will become a better player because it goes hand in hand. If you get out there and you are not doing the right things and are not going to class, not going to study hall, it will show up on the field. A lot of times I start a meeting out by talking about doing the right things. They seem to have picked it up. I don’t get many e-mails (about players) and I like that. That means they are doing the right things and it is starting to show up on the field.”

Question: Do kids play harder if they understand how much you care ? omas:

Th “Yes I do feel that if they know you care they will run through a brick wall for you. A lot of coaches yell and there is nothing behind it. I have had coaches like that and I kind of played for myself. But the coaches that really cared about me, I didn’t mind them getting on me because I knew if I did the wrong thing, I kind of felt like I was letting them down. That was big for me.”

Question: What are you trying to get through to this group?

Thomas: “The first thing I talked to them about was consistency on and off the field. I felt it was important. Obviously wherever I go in the city, the first thing people say when they find out I am the receivers coach is, ‘Congratulations. Can you teach them how to catch?’ I tell them all the time what is the definition of you. Do you want to be known as a group that was not consistent? We challenge each other. I challenge them actually. I talk to them all the time about working hard and then good things happen but you have to put in the extra time to be the best. It just does not happen by osmosis. You have to study the plays. You have to go out every day ready to work. I love for them to be loose, but you have to work. Football is a great game, but being on the field there were a lot of people who wish they had that opportunity to be out there. Don’t let a day pass you by that you don’t work.”

Question: Are they catching the ball better?

Thomas: “Yes. For some of them that have casts on, they are still catching the ball. Sometimes you have to excuse a guy with a cast on for dropping one or two. But if no cast on, they better catch every one and they are doing a good job. From what I saw on film a lot of times (last year), they were running without catching the ball. They weren’t focused on catching the ball and properly looking the ball in. We do a lot of drills on that. A lot. You have to be able to catch the ball away from your body and need strong hands.”

One of Kentucky’s top recruiting targets in the 2017 class continues to be 6-9 Jarred Vanderbilt of Houston.

He’s coached by former Louisville standout Rodney McCray, but Vanderbilt’s father, Robert, says McCray would have no problem with Vanderbilt picking any school, including Kentucky.

“We all want what is best for him. As coaches and parents, we want the best for him. He (Mc- Cray) wants to teach about life, not just basketball. Sometimes Scooter (McCray) will come around. (Kentucky assistant coach) Kenny Payne came down to visit. We always have them talk to players to make sure players know what is going on,” Robert Vanderbilt said.

Kentucky could also get a recruiting boost from incoming freshman De’Aaron Fox of Texas.

“They get along very well. They socialize, hang out during AAU season,” Robert Vanderbilt said. “He is a good player. I am very impressed by him. I tell him all the time it is great to have talent he has. He comes from a good family, too.

“Very good kid. He is low key, he is leader of his team. He has a good time and carries himself in the manner he is supposed to. Kentucky is really getting a good player.

“We have a relationship with him and his parents. We are originally from Mississippi and they are, too, so we connected right away. Sure they will be more than happy to give us information on Kentucky. We are all trying to get to the same place.”

Jarred Vanderbilt played in Kentucky four times last season and had plenty of UK fans let him know they would like to see him play at Kentucky.

“This is one of our favorite states. We love the support and appreciate it,” Robert Vanderbilt said.

As the recruiting offers continue to grow, Florida quarterback Mac Jones continues to insist he’s not only solid with his verbal commitment to Kentucky but gladly accepts being the face of the 2017 recruiting class.

“I’ve always had a chip on my shoulder,” said Jones. “I am getting a lot more attention now. Early, I did not get evaluated as much as I wanted. That has changed by people hearing my name and wanting to see me.”

He admits recruiting can be “stressful and crazy” at times. He tries to keep a level head and focus on his goal.

“I also try to keep all the (UK) recruits together while I am also focusing on my high school senior season coming up,” he said.

Even though he created a social media buzz a time or two for UK fans when he thanked different schools for offering scholarships — including Alabama and Louisville — he is careful about what he posts on social media.

“I make sure I don’t post anything stupid. My mom and dad did a good job with me on social media,” Jones said. “You have to be careful. Everyone can see it. I try to portray myself as an individual. I try not to listen to what others might say about me and not get big headed.

“The big reason I committed to Kentucky, I had already seen a lot of schools. You could see how Kentucky was kind of coming up and I thought I could come in and make things happen and help build recruiting classes,” he said. in Somerset featuring Cameron Mills and Jarrod Polson as daily instructors. However, former Wildcat Dakari Johnson will also be making a special appearance during the camp.

Johnson was on the 2015 Final Four team that started the season 38-0 before losing to Wisconsin. He left UK after his freshman year and spent last season in the NBA Developmental League.

“If you notice, one school that offers everybody first is Kentucky,” Taylor said. “They really got an eye for finding talent. Then all the other SEC schools come behind them, so I give them props.”

That’s exactly what happened with Florida junior quarterback Mac Jones. He got his first offer from UK, verbally committed to UK and has stayed committed despite having over 20 scholarship offers now.

Taylor said he was excited by Kentucky’s offer before deciding to later to sign with Florida.

“Sometimes I feel bad because that happens to them all the time, but that’s just how it is,” Taylor told Abolverdi. “They’re still good coaches and they’ll get theirs.”

Matt DiLorenzo of Pro Player Solutions prides himself on delivering what he promises — and any time I have been at any event he’s been associated with he has done just that.

Saturday he had helped schedule an appearance for ex- UK point guard Marquis Teague at All Sports in Fayette Mall in Lexington. Teague was the starting point guard on Kentucky’s 2012 national championship team.

However, Teague cancelled less than 13 hours before it was scheduled to start and DiLorenzo was not happy.

“Pro Player Solutions will not be working with Mr. Teague moving forward as canceling the night before a scheduled event is not the character we look in our clients,” DiLorenzo said.

Who can blame him?