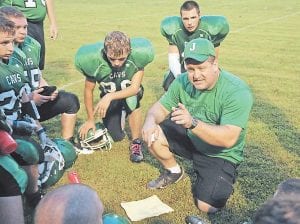 NEW COACH, NEW MINDSET AT JENKINS — New Jenkins football coach Daniel Sexton talked to his players during a recent scrimmage game. Sexton said he hopes to change the traditional mentality of the team and instill in them a belief that, together, they can win football games. (Photos by Chris Anderson)

The football coach’s position at independent Jenkins High School has resembled a revolving door over the past decade, with Sexton being the sixth person to hold the position in 10 years. Over that same period, the Jenkins Cavalier football program has seen little in the way of success, with a combined record of 23 wins and a 85 losses.

To surmise that spirits are perennially low in Cavalier country during football season may be an understatement. Sexton, however, said he believes things are different this year for Jenkins, and he hopes to bring a new mindset to the community.

Sexton is a 1991 graduate of Fleming-Neon High School and played football briefly at the former Cumberland College, now the University of the Cumberlands. He is also a corrections officer at Red Onion State Prison in nearby Pound, Va. Sexton said he deals with troubled individuals on a regular basis with one of his duties working with inmates who have the potential to transition beyond the life of crime and trouble which landed them in prison and help them prepare for their eventual release from incarceration. 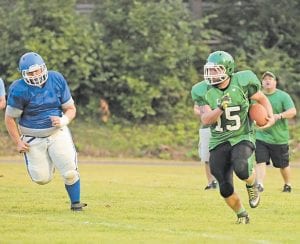 Sexton said his job at the prison has prepared him for the task of bringing a positive belief to the Jenkins High School football.

“The kids, to me, they kind of feel like they can’t win due to the way that it’s been in the past,” he said. “I really want to change that. I want these kids to win. I want them to feel, to know what it feels like to win and I want to do everything that I can. And to me that’s what it’s about. It’s about changing the little subculture that’s here. It’s about making a difference.”

Sexton said he did not expect to get the coaching job at Jenkins. The program had seen little stability in its ever-changing roster of head coaches since 2003, when Mark Johnson began his five-year tenure at the helm of the Cavaliers. Johnson guided the Cavs to 15 wins while suffering 37 losses. He also helped lead Jenkins to its first winning record in several years and also its last winning record — 6-5 in 2007. 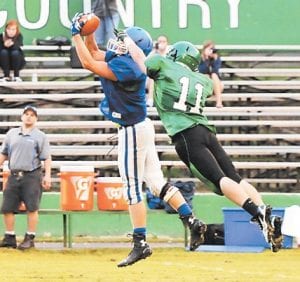 After the departure of Johnson, the father of former Letcher County Central standout athlete Logan Johnson, who is currently a member of the Morehead State University football program — David Jones coached the Cavaliers for a season before current LCC assistant coach Larry Maggard coached the team for three seasons, ending with a record of two wins and 31 losses. After Maggard, Eric Ratliff and Joe Colwell commanded the team for the next two seasons, with Ratliff leading the team to a 4-7 record in 2012.

While Sexton realizes the diffi culty facing him, he says he has wanted the job as his own since attending home games last season.

Sexton said that in the short time he has had to prepare for the coming season — he was hired in July — he believes he has “won the kids over” and developed a good relationship his players, which numbered only 15 on the first day of school.

“I’m trying to get more of these kids to come out and realize that if we work together as a team, if we put forth 100 percent effort, if we listen and we learn how to do things correctly, that we can win again,” he said. “That’s my goal.”

Sexton said low numbers of players for the football team will continue to be an issue when compared to teams such as Hazard or Pikeville, which beginning next season will be a part of the same football district as Jenkins. He said the solution is keeping the players in shape and sharp mentally as well.

“If you’re going to play iron man football and play it both ways, you have to be in better shape than your opponent,” he said. “As far as being able to like a lot of teams and have an offense and have a defense, I’m not really going to be able to do that. But I do a lot of conditioning.”

Sexton said he has already heard some complaints from his players about the amount of conditioning they have endured, but he believes the approach has gone a long way toward eliminating potential nagging injuries and in winning over members the community.

“I think that hopes for the team are a little bit higher than what they had been in the past, or that what it seems,” he said. “It kind of puts me on the hot seat a little bit.”

Sexton said the Cavs’ quarterback picture is still not clear, but will center upon candidates Andrew Oliver and Austin Fields. He said Oliver’s arm strengths and Fields’s ability to read the field during play are examples of the talent on the Jenkins squad.

“ I’ve got some talent, I really do, and these kids have a lot of heart and a lot of desire to win,” he said. “But there’s always growing pains, especially when you’re coming in and you’re installing a new offense and a new defense and it’s something that they’re totally not used to. They ran wing football last year, but they way I run wing football and they view wing football is a lot different.”

Sexton said he will praise the team when it works hard.

Sexton is married and has three daughters. He said he plans to motivate his football players in the same way he tries to motivate his daughters — by setting small, attainable goals and letting them know that if they need help he is there for them.

“I told these kids, ‘When you need help, let me know and we’ll get you the help you need,’” he said. “That way their grades go up, their confidence goes up … it’s just another small step.”