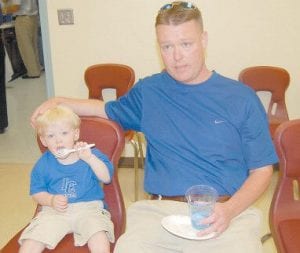 Robert Hammonds, new head basketball coach at Letcher County Central High School, sat beside his 22-month-old son Paxton while he ate cake at a press conference and community greeting held in Whitesburg May 19.

The new head basketball coach at Letcher County Central High School said he came to Whitesburg for the opportunity to work in school administration, be competitive and to be closer to family.

Robert Hammonds, 36, said he left West Jessamine High School because of the “opportunity to be in administration and (Letcher Central) being a new school and being able to be competitive.”

Hammonds and his wife, Brandy, have two sons — 22-monthold Paxton and 10-month-old Peyton.

“I think this allows my wife to stay home with the boys and be closer to family,” said Hammonds. “Hopefully it works out.” 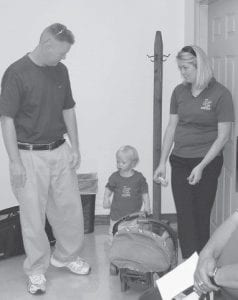 Hammonds, who is from Prestonsburg, said his parents live about an hour away in Daniels Creek.

“I think they are going to be excited to have the boys close,” said Hammonds. “Hopefully they will get to see them more.”

“I saw his team play at the state tournament three games and was very impressed by the way they handled themselves,” said Arthur “Ozz” Jackson, athletic director of LCCHS.

Jackson said Hammonds was named 12th Region coach of the year two years in a row and took West Jessamine further than any other coach in the history of the school.

“I’m excited and thrilled he is coming our way,” said Jackson. “I told him how much potential our kids have and how we need someone lik e him .”

“I’m not going to lie,” said Hammonds. “It was a tough choice. I think they will probably be ranked number one in the region and sho uld be .”

Hammonds said he hopes to lead the Cougars to the Sweet Sixteen.

“I think that is a goal you should have every year,” said Hammonds.

He said other goals include continuing “to build the program where it is now and to continue on building on tradition and hopefully make it a 14th Region contender ev ery year.”

He said he hopes to create a “family atmosphere” for his new team.

“My door has always been open for my players,” said Hammonds. “If you ask any of my old players they would tell you that. I have had about 25 texts (messages) from my old players today.”

Hammonds said he has already met some of Letcher Central’s players but hasn’t decided what style of basketball his new team will play this coming season.

“Really I play just about everything,” he said. “It just kind of dictated by what kind of team you have. I’ve played slowdown basketball before. Actually we even changed this year. We averaged 86 to 87 points after Christmas. It just kind of depends on what fits the team the best, whatever makes us successful.”

Asked if any of his assistant coaches will follow him to Letcher Central, Hammonds said he wasn’t sure.

“They are exploring some different options, too,” he said. “It’s kind of open r ight no w.”

reported Tuesday that Hammonds will be a third assistant principal at LCCHS, a position just created by the Letcher County Board of Education at its meeting May 18.

Craft said LCCHS Principal Stephen Boggs and the schoolbased decision making council (SBDM) would ultimately make a recommendation for the assistant principal position. She said she would approve their recommendation.

According to the district’s salary schedule for a Rank I employee entering his 12th year in the education field, Hammonds will make $53,387 if he is chosen for one of the two administrative positions. Craft said Hammonds would be paid one fourth of his certified salary for his coaching position, which would be $13,347.

Hammonds said he has long been interested in having an administrative position.

“It was something I knew I wanted to get into to further my career later on,” said Hammonds.

Craft thinks Hammonds and the basketball team will do well together.

“They all have a chemistry that is similar,” said Craft. “They are all quiet and all bus iness.”

Speaking at a press conference held to announce his hiring on Tuesday, Hammonds told a crowd of about 50 that the past doesn’t matter.

“I understand coming here the past doesn’t really matter,” said Hammonds. “I understand it is what you do here, what you do with the team here, what you do at the end of the year. That’s all anybody is interested in, and that’s the way it should be. Be there for the kids. Obviously there has been success before. Being a new school, the facilities you have are unbelievable. I’m happy to be a part of it .”

LCCHS players James Gose, Cole Cornett and Brian Roark attended the press conference and were excited that Hammonds was named their new coach.

“I really look forward to seeing his style of coaching,” said Gose.

“I watched him coach in the state tournament and was very impressed and am glad to see he is here,” said Roark.

Letcher County Board of Education Member Dr. Sam Quillen Jr. told Hammonds the board welcomes him and supports him and hopes he has an easy transition as he settles into Letcher County.

“I assure you our board will be good to you and will treat you right,” added Board Chairman Will Smith. “I assure you we will give you the r esources to w in.”

Craft told the crowd that she needs help finding the Hammonds family a home.

“I know this community will embrace this family, but help them find a house,” said Craft. “We’ve been looking really hard all day. We’re worn out.”