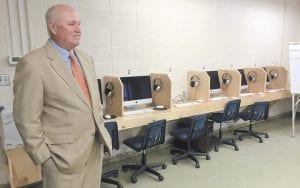 State Sen. Johnny Ray Turner was photographed with new Apple computers that will be available to students attending the Jenkins Independent Schools.

The new technology is part of the district’s participation in the Dataseam program.

Dataseam is a unique Kentucky enterprise created almost 10 years ago with funding from the Kentucky General Assembly. The new computers for Jenkins Independent are part of the legislature’s ongoing appropriations to the program.

Turner said, “Dataseam helps school districts in Kentucky’s coalfields keep pace with the amount of technology available in our classrooms. Other districts often have more local resources to invest in digital tools for learning than we do in east Kentucky.”

Dataseam has provided more than 19,000 computers to schools since its inception. The workstations are linked together into one of the largest computing grids in the world that powers research for new cancer treatments at the University of Louisville’s James Graham Brown Cancer Center.