New cookbooks focused on many wonders of pig

By MICHELE KAYAL
For The Associated Press 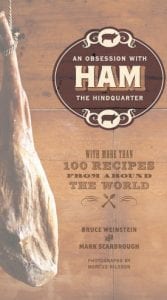 “An Obsession with the Hindquarter,” by Bruce Weinstein and Mark Scarbrough. (AP Photo/Stewart, Tabori & Chang)

Cookbooks these days often sport long taglines. But porkistas are refreshingly to the point. Three letters seem to suffice.

“Pig,” by cookbook writer James Villas, is nothing less than a poem of porcine devotion, an ode to the idea that if everything’s better with bacon, everything else is better with anything hog-related (think skillet cornbread with cracklin’s).

A born-and-bred Southerner, the author off ers a jowl-to-tail primer on the animal’s parts and their uses, including 300 recipes.

Crisp yet yielding ham croquettes recall bygone menus of southern country clubs, and baked double pork chops stuff ed with oysters suggest a rare decadence. A whole chapter is devoted to barbecue, of course. And there’s little regard for what your doctor might think of your meal: see deep-fried marinated pork nuggets.

For those of us unlucky enough to have been born outside pig heaven (the South), Villas off ers recipes and explanations for dishes such as snert (pig and pea soup,) Dutch goose (whole roast pig belly,) and frogmore stew (no frogs involved).

And while some items may seem unappealing if you weren’t raised with them — livermush and souse (hogs head cheese) among them — they reveal a southern culinary anthropology.

The similarly themed “Ham,” by Bruce Weinstein and Mark Scarbrough, takes a narrower approach to the animal, focusing only on the leg. That is, the ham.

But once there, the authors proff er a humorous and sometimes snarky world tour of ham in all its forms.

Fresh ham — the chapter for which opens with a laugh-outloud photo of some very, very fresh ham (that is, piglets) — can be roasted with cloves American style, done up with orange flower water a la Morocco, or stewed with annatto seeds as in Peru.

The sections on dry cured ham take readers from Old World to New World with recipes from salty-sweet pasta with caramelized cauliflower and prosciutto to the southern breakfast staple of fried country ham steaks with red-eye gravy.

If the only ham you’ve ever known is the spiral-sliced stuff in the supermarket, you’ll learn that it’s wet cured, or brined ham.

Sometimes called “city ham” or “picnic ham,” the authors serve up appetizing preparations such as a ham-studded macaroni and cheese and sassy jambalaya croquettes.