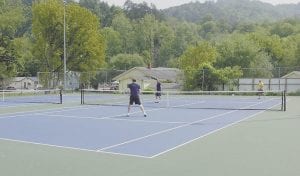 The $40,000 project will make it possible for Letcher County Central High School to host a regional tennis tournament.