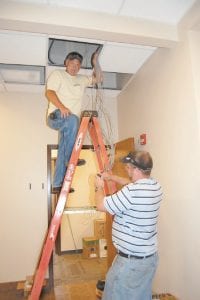 The Letcher Commonwealth’s Attorney’s office is moving across the street from its present location at City Hall in downtown Whitesburg to the second floor of the Letcher County Health Department.

Letcher Commonwealth’s Attorney Edison G. Banks II said more space was needed in order to store case documents and the City of Whitesburg didn’t have a larger place to offer.

“City Hall has been extremely good to us and we have enjoyed being here,” said Banks, who has been commonwealth’s attorney for 14 years.

Banks, Letcher Assistant Commonwealth’s Attorney Jenna Watts, Victim’s Advocate Felicia Wright and secretaries Kristi Skeens and Linda Bell will each have their own office in the health department building, which is located at 115 East Main Street.

The commonwealth’s attorney’s office will occupy 2,187 square feet of the sec- ond floor.

Staff began moving items to the health department on Tuesday afternoon. Banks plans to continue to work and attend court this week during the move. Banks anticipates that everything will be moved into the new suite by Friday evening.

Network technicians with state government installed wiring for computer and telephone service on Tuesday. Phones will be out of service Friday and Monday.

Banks said extra space will not only alleviate storage problems, but also improve privacy issues. Wright, whose old office had three doors, will now have a place where she can speak confidentially with sexual abuse victims, Banks said, and attorneys can meet with clients in private.

Banks said during discovery conferences there have been instances where a defendant and victim have been at the office at the same time. Now, Banks will have separate areas of the office to deter confrontations.

The Letcher County Health Department moved to its new location in 2009 on the former site of Suburban Motel.