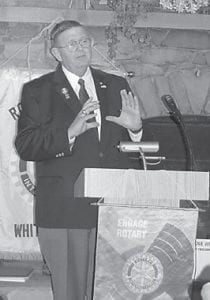 The new Rotary District 6740 governor, Jack McAllister, attended the July 30 Whitesburg Rotary Club meeting at Pine Mountain Grill. Governor McAllister became a Rotarian in 1979 while working in Ottawa, Canada as a research scientist for the Agriculture Department of the Canadian federal government. He joined the Rotary Club of Lexington in 1990 and has since held several leadership positions in the Lexington Club as well as District 6740. He is a multi- Paul Harris Fellow, the most prestigious award of Rotary International for his contributions to the Rotary Foundation.

Prior to addressing members of the Rotary Club of Whitesburg, Governor McAllister met with the board of directors and committee chairs to discuss plans for the 2013-14 Rotary year. He commended the club for its efforts to increase membership and selection of service projects for the year. He encouraged club members to promote Polioplus the week of October 20-26 with Thursday, October 24, being World Polio Day.

This year’s theme for Rotary International, “Engage Rotary, Change Lives”, challenges members to take responsibility for their community and take the initiative to do what is right and not what is easy. The Rotary Club of Whitesburg has selected the Imagination Library Literacy Project as its number one local project for the year. The club’s international projects include donating $1,000 to the polio eradication effort and participating in the district’s effort to donate 3,100 pairs of shoes to the Shoes for Kids project.