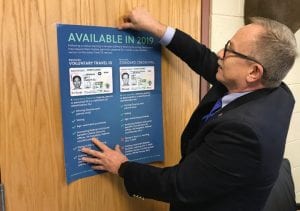 Beginning around the end of April, Kentucky residents should be prepared to shell out a little more for a driver’s license, and provide a lot more information.

The changes are part of the Real ID Act passed by Congress in 2005 in the wake of the 9/11 attacks four years before. Kentucky is one of the last states to implement the law, which required states to have to new identification cards in use by 2013. Only 25 states and the District of Columbia are fully compliant, 27 states and territories have received extensions, and one state is operating in a grace period.

“After October 1, 2020, if you’re going to fly domestically and you don’t have a Real ID, you’ll have to have a passport,” Letcher Circuit Clerk Mike Watts said.

Watts, who took office in January, is the official who is responsible for issuing the license here. He said Monday that beginning April 29, anyone renewing a license will have to get either a new “standard credential,” or a “Real ID.” The cost for a standard license, which does not allow the holder to fly even domestically, will increase to $21.50 for a four-year license from the current $20, and $43 for a license that is good for eight years. 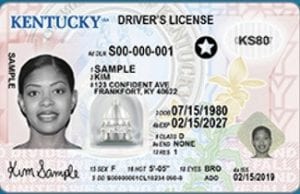 Pictured at right is a sample of the new driver’s license that will be required in Letcher County and elsewhere in the commonwealth by the end of April.

Real ID, which will allow the holder to fly on a commercial airliner, will cost $24 for four years and $48 for eight years.

In order to get the licenses that allow flight, residents will have to submit a certified copy of their birth certificate, a Social Security card that has not been laminated and is not one of the metal cards that can be ordered online, and two documents proving their 911 address, such as utility bills in their name. For a standard credential, residents can bring in all of those items except only one proof of address is required.

The new IDs have been resisted by people on both sides of the political spectrum because of fears of invasion of privacy, and that they amount to a national identification program. The government says the cards are not a national ID, and that there is no national database being built from them.

“They’re saying it’s not a national ID, it’s a Kentucky ID, but it seems to me if they’re all the same it’s a national ID,” Watts said.

Persons who don’t want to participate in the IDs that allow flight on commercial airlines will still be able to fly if they have a passport, but it will be required for domestic flights instead of just international flights as it is now.

Prices for standard IDs are as follows:

Prices for Travel IDs are as follows: