New drug court grad once cut fingers off to get prescriptions 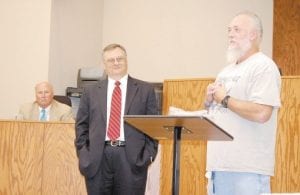 NEW DRUG COURT GRADUATE — Alan Adams, of Mayking, talked about his hardships and how he has changed for the better during the Letcher County Drug Court graduation on Oct. 8 in the Letcher Circuit Courtroom. State Sen. Johnny Ray Turner (far left) and Letcher Circuit Judge Sam Wright are seen listening to Adams. (Photo by Sally Barto)

It’s probably safe to say that few addicts have gone to the extremes Alan Adams has to get drugs and lived to tell about it.

During his 30 years of addiction to pain pills, Adams, of Mayking, did about anything and everything to satisfy his cravings for narcotics.

“I’ve cut fingers off,” said Adams, 46. “I have shot myself, been shot and had my teeth pulled out for pain pills. The devil had me and had me good when I was only 14 and worked on me for 30 years.”

Like many former addicts, Adams decided to kick the habit after he was facing time in prison and grew sick and tired of feeling sick and tired. On Oct. 8, Adams marked his third year of sobriety by participating in a ceremony honoring the latest graduates of the Letcher County Drug Court.

“I have been clean for 36 months and eight days,” said Adams, who spent two years getting through the drug court diversion program. “I am really proud. If I can go through it, I am thinking anybody can go through it.”

Letcher Circuit Judge Sam Wright, who presided over last week’s ceremony, said he has dealt with Adams since he became judge in 1992.

“I have had to put him in jail several times,” said Wright. “He has had a harsh journey over the years. Alan has gone through some horrible experiences needing drugs.”

Wright said Adams has not had “a dirty drug test” in two years. As part of the drug court requirements, Adams was tested for drugs at least three times a week.

“It helps gives them the motivation to stay off drugs,” said Wright.

Adams also was required to attend counseling three times a week, attend Narcotics Anonymous meetings and complete homework assignments. All drug court participants must do public service work or have a full-time job.

“Drug court itself is a full-time job for people,” said Wright. “This is a heck of a journey for these people and they work hard at it. I’ve actually had people come out of prison and complain that drug court is harder.”

Adams credits his ability to keep himself occupied with normal daily activities as one of the main reasons he has been able to stay clean.

“Where I am a single man I make sure I am always busy and don’t have dead time,” said Adams. “Dead time is the devil’s playground.”

Adams, who said he became a Christian while in jail on drug charges, spent much of that spare time preparing to take the GED (General Educational Development) test.

“The very important part of drug court is learning how to cope with real world pressures and temptations so when they are out of this program they will have the tools and resources to stay off drugs when times get rough,” said Wright.

Now that he has completed drug court, Adams wants to help others who struggle with addiction.

“My goal now is to help others who have alcohol or drug problems,” said Adams. “I feel like they look at me as a light and can see what being clean and having God in their lives is like. Without God I wouldn’t be alive.”