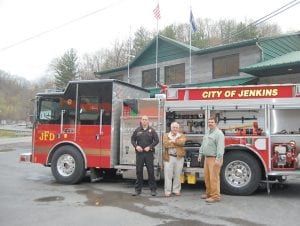 Jenkins Police Chief Adam Swindall, Jenkins Mayor G.C. Kincer (center) and Jenkins Administrator Todd DePriest were photographed in front of a new $263,000 pumper truck the city has purchased. The custom cab truck, also seen at left, is equipped with self-contained breathing apparatuses so at least five firefi ghters can have air packs on when they arrive at a scene to fight a fire. The truck can haul 1,000 gallons of water. It also has a phone system and a generator. The purchase of the fire truck was approved by the Jenkins City Council and ordered last May. DePriest said a 1995 pumper truck was traded in and the payments were kept the same, keeping everything within budget. DePriest said the new fire truck was necessary to stay up to date. (Photo by Sally Barto) 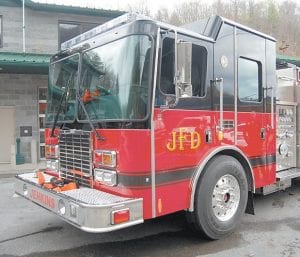