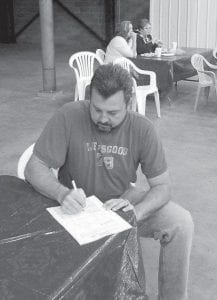 APPLYING FOR JOB — Chris Caudill of Whitco filled out an application for a job with nitrogen producer Ferus Inc. during a job fair and open house in Jenkins Monday. Between 35 and 40 jobs are available. (Photo by William Farley)

After several months of anticipation, a new industrial facility at Gateway Industrial Park in Jenkins has begun to take applications for 35-40 jobs that a company official described as mostly skilled labor.

Harris said the new hires, along with field manager Fred Adams and base administrator Deana Richmond, will make up the initial staff for the nitrogen extraction facility, which will serve natural gas and oil drilling facilities in the region. He said three job fairs were to be held this week in Whitesburg, Pikeville, and Norton, Va., and that Ferus is interviewing for all available positions. Resumes will be accepted along with applications.

The Pikeville job fair was held Tuesday. A second job fair is being held in Whitesburg today (Wednesday) in the Pine Mountain Grill conference room from 9 a.m. until 5 p.m., and the third, in Norton at the Holiday Inn Express, on December 2 from 9 a.m. until 5 p.m. Harris said he plans to start hiring within the next couple of weeks so that workers can receive training over the next several months.

Ferus is a Canadian company with existing U.S. operations in Colorado. The Jenkins nitrogen production facility will be located in Gateway Industrial Park, where the company has purchased a large “spec” building to use for offices and warehousing. Bids have been taken for remodeling the front of the building into offices. Construction on the nitrogen plant started Monday.

Harris said the plant should be in full operation by mid-July. He said he expects to have trucks and other equipment in Jenkins by January 1, and plans to be transporting its nitrogen product to customers by April 1. Harris said Ferus can obtain the product from its other facilities so it can begin operations before the plant is completed.

The nitrogen extraction process takes in regular air and performs a combination of cooling and pressurization to cool the air to below minus 390 degrees Fahrenheit, at which point the gases become liquid and the nitrogen can be extracted. The rest of the gases are released back into the atmosphere unharmed. Earth’s atmosphere is 70 percent nitrogen, so there is plenty to spare.