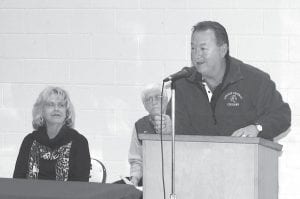 New Letcher County Central football coach Mike Holcomb (right) was introduced to the public on March 20 during an event at the school. Also pictured are Supt. Anna Craft and Athletics Director Ozz Jackson.

One of the most recognizable names in coaching in all of eastern Kentucky has been hired as the new head football coach at Letcher County Central High School.

Mike Holcomb, who coached Breathitt County High School for the past 30 years, was introduced at a press conference held March 20 in the LCCHS foyer, which was packed with local dignitaries, business owners, community supporters and several members of the football team.

“Thanks for people having faith in me to turn the keys over to this program,” said Holcomb. “There’s no magic formula to winning. … It’s made by hard work, dedication and pride.”

Holcomb said the football team may not win every game, but it won’t be because of a lack of desire or preparation.

“Coach Holcomb’s record speaks for itself and he has received numerous coach of the year accolades in his career,” said LCC Athletic Director Arthur “Ozz” Jackson.

Coach Holcomb said he will work endlessly to get as many LCC students playing football as possible. He said all kids can contribute something to the team and that football and a team atmosphere can do so much for a young man’s life.

“Everyone is real excited about the hiring and I have heard a lot more people are going to come out to play this year,” said Houston Watts, who will be a senior on the team this coming season.

The coaching position became open after Paul Rains resigned January 28 after coaching the Cougars only one year. Holcomb becomes the fourth head coach to lead the LCC football program in five years.

Jackson said Holcomb “is a good family man who truly cares about his players.”

The schedule is as follows: