New health building set to open to public in June 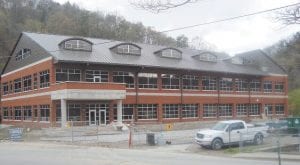 The new building is located in downtown Whitesburg on the site formerly occupied by the Suburban Motel.

The $6 million building, located on the old Suburban Motel site at the corner of East Main Street and Madison Street in Whitesburg, is five times as large as the current health department building located behind the Letcher County Courthouse.

Mullins, who has been director of the health center for 29 years, said space has been a continuing problem at the current health center.

“We just ran out of space,” said Mullins. “I’ve knocked a wall out to store files.”

Mullins said the last renovation to the current 5,700-square-foot building was done in 1987 when five offices were added to the back.

“There was nowhere else to go and we needed to build to be able to offer services in a more efficient manner and to not be stacked on top of each other,” said Mullins.

Mullins said some staff members who now share workspace will soon be able to have their own patient exam rooms, which in turn will help with privacy issues. 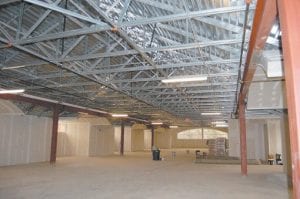 The building’s third floor will be used for storage until it is needed in case the health center ever has to expand again.

The new space will also include a large laboratory that was nonexistent in the old building.

“They didn’t have a place for a laboratory,” said Mullins. “They just did tests wherever they could and not in one centralized location.”

The new 32,000-square-foot center was designed by Richardson Associates of Whitesburg and consists of three stories. The first floor will serve as the clinic and the second floor will house administration. The third floor will remain vacant for now, but will be used for storage.

Mullins said a third floor was included in the design because the Letcher County Board of Heath did not want the department to be faced with outgrowing the space in a few years.

Mullins said the larger building also includes features such as a large classroom which will enable staff to hold breastfeeding classes, conduct meetings of diabetes support groups, offer nutritious cooking classes and, when the funding is available, smoking cessation classes. 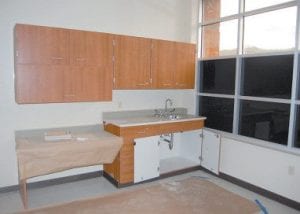 Pictured above is one of seven patient examination rooms that will be available when the new three-stor y building opens June 1.

Seven patient examination rooms are included in the new building. It also has a physical fitness room where the staff can exercise during breaks and after work. A balcony facing East Main Street can be accessed from the second floor boardroom which will have hardwood floors.

A high-tech security system with keypad entry and a geothermal heating system are among other features the new building offers.

The construction project began in January 2008 and should wrap up in the coming weeks.

Starr Handy, construction project manager with Codell Construction Company of Winchester, said construction of the inside of the building is nearly complete, with only a few touchup items left to be finished.

Building sidewalks, paving the parking area and installing outside lighting are the items left to be completed, Handy said.

Mullins said new furnishings will begin arriving May 14. Workers will begin moving items from the old building to the new one on May 27. 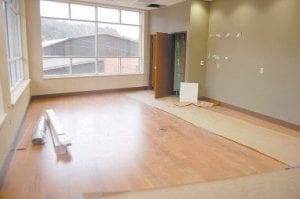 This large room will be used for monthly meetings by the Letcher County Board of Health.

Mullins said members of the local health board have long expressed interest in building such a facility. 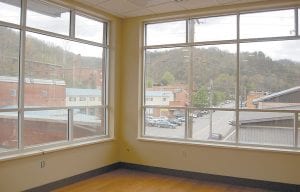 This view from the boardroom overlooks the old Home Lumber Co. property which has been redeveloped into a shopping center/office building, and the old Lewis Wholesale Building now occupied by Whitesburg City Hall. A portion of the old Whitesburg High School campus can also been seen.