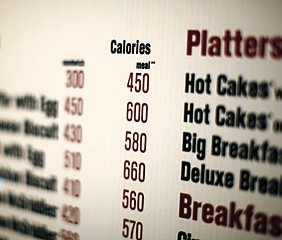 Calories of each food item appear on a McDonalds drive-thru menu in New York. Calorie counts will have to be listed on restaurant menus under a provision tucked into the massive health care overhaul bill. (AP Photo/Ed Ou, File)

That Caesar salad you’re about to eat? It’s 800 calories, and that’s without the croutons. The fettuccine alfredo? A whopping 1,220 calories. You may choose to ignore the numbers, but soon it’s going to be tough to deny you saw them.

A requirement tucked into the nation’s massive health care bill will make calorie counts impossible for thousands of restaurants to hide and difficult for consumers to ignore.

More than 200,000 fast food and other chain restaurants will have to include calorie counts on menus, menu boards and even drive-throughs.

The new law, which applies to any restaurant with 20 or more locations, directs the Food and Drug Administration to create a new national standard for menu labeling, superseding a growing number of state and city laws. President Barack Obama was expected to sign the health care legislation Tuesday.

The idea is to make sure that customers process the calorie information as they are ordering.

Many restaurants currently post nutritional information in a hallway, on a hamburger wrapper or on their Web site. The new law will make calories immediately available for most items.

“The nutrition information is right on the menu or menu board next to the name of the menu item, rather than in a pamphlet or in tiny print on a poster, so that consumers can see it when they are making ordering decisions,” says Iowa Sen. Tom Harkin, chairman of the Health, Education, Labor and Pensions Committee, who wrote the provision.

It was added to the health bill with the support of the restaurant industry, which is facing different laws from cities and states. Sue Hensley of the National Restaurant Association says it will help restaurants better respond to their customers.

“That growing patchwork of regulations and legislation in diff erent parts of the country has been a real challenge, and this will allow operators to better be able to provide their information,” she said.

Some meals will be exempt from the calorie counts, including specials on the menu less than 60 days.

The law will also apply to foods sold in vending machines, specifically those that do not have visible calorie listings on the front of the package.

New York City was the first in the country to put a calorie posting law in place. Since then, California, Seattle and other places have done so.

The FDA will have a year to write the new rules, which health advocates have been pushing for years. Margo Wootan, director of nutrition policy at the Center for Science in the Public Interest, said it’s one step in the fight against obesity.

Still, it’s unclear what effect the labeling will have. In a study published last year by the online journal Health Affairs, only half of customers in poor New York City neighborhoods with high rates of obesity and diabetes noticed the calorie counts.

The accuracy of the counts could also be called into question, according to a diff erent study.

In January, the Journal of the American Dietetic Association published a survey of 10 chain restaurants, including Wendy’s and Ruby Tuesday, that said the number of calories in 29 meals or other menu items was an average of 18 percent higher than listed.

The discrepancies were said to be due to variations in ingredients and portion sizes.