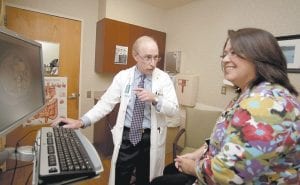 There’s new hope for an overlooked epidemic: Two powerful drugs are nearing the market that promise to help cure many more people of liver-attacking hepatitis C — even though most who have the simmering infection don’t know it yet.

Surprisingly, two-thirds of hepatitis C sufferers are thought to be baby boomers who’ve harbored since their younger, perhaps wilder, years a virus that can take two or three decades to do its damage.

What could be a treatment revolution is spurring the government to consider if it’s time to start screening aging baby boomers for hepatitis C, just like they get various cancer checks.

“We’re entering a whole new era of therapy,” says Dr. John Ward, hepatitis chief at the Centers for Disease Control and Prevention. “We really want to begin that clarion call for action for this population who’s at risk.”

Today’s two-drug treatment for hepatitis C cures only about 40 percent of people with the most common variety of the virus, and causes some grueling side effects. Now major studies show that adding a new drug —either Vertex Pharmaceuticals’ telaprevir or Merck & Co.’s boceprevir — can boost those cure rates as high as 75 percent. And they allow some people to cut treatment time in half, to six months, thus lessening how long they must deal with those side effects.

If the Food and Drug Administration approves the drugs — a decision widely expected this summer — they would be the first that work by directly targeting the hepatitis C virus. Specialists draw comparisons to the early 1990s when potent combination therapies emerged to treat AIDS. Many recently diagnosed patients are postponing therapy to await these new drug cocktails in hopes of a better chance at a faster cure, says Dr. Paul Pockros, hepatology chief at the Scripps Clinic in La Jolla, Calif., who helped test telaprevir.

However, the bigger impact could come if more people get tested for hepatitis C, a blood-borne virus. It’s often stigmatized as a risk only to people who inject illegal drugs. But the virus could have begun festering from a blood transfusion before 1992, when testing of the blood supply began.

Lapses in infection control in health facilities still occasionally expose people today. So could even a one-time experiment with drugs way back in college, something doctors are reluctant to ask a now middle-aged, button-downed patient to reveal, says Ward.

“It cuts across every segment of society,” adds Dr. Arun Sanyal of Virginia Commonwealth University, past president of the American Association for the Study of Liver Diseases. “I can tell you our hepatitis C treatment clinic is a great social equalizer.”

About 3.2 million Americans, and 170 million people worldwide, have chronic hepatitis C. In the U.S., new infections have dropped dramatically — although the disease’s toll is rising as people infected decades earlier reach ages where their livers start showing damage. Hepatitis C already is a leading cause of liver transplants, and it kills about 12,000 U.S. patients a year, a number expected to triple within 20 years.

Most people find out they’re infected like Brian Graham of Briarcliff Manor, N.Y., during a routine check-up that spotted elevated liver enzymes. He’d never heard of hepatitis C and had no obvious risk factors. But tests showed the virus had begun to scar his liver. So over the last decade he tried three rounds of traditional treatments, with increasingly tough side effects, to no avail.

“I didn’t want to die of liver disease or cancer or suffer the prospect of having to tee up for a liver transplant. Scary stuff,” says Graham, now 56.

Enter the new drugs. They work by blocking an enzyme named protease that’s key for the virus to reproduce. But they must be taken together with standard medications — ribavirin pills plus injections of interferon-alpha — that are thought to boost the immune system.

According to studies presented at a recent medical meeting, 67 percent to 75 percent of patients given treatment including either boceprevir or telaprevir, respectively, had what doctors call a cure. That’s defined as no sign of the hepatitis C virus six months after their last dose. Importantly, only about a quarter of black patients are helped by standard therapy but adding one of the new drugs more than doubled their cure rates.

People getting their first-ever treatment did best, but the studies also found improvements in hard-to-treat patients like Graham.

“The fourth time did the trick,” says Graham, who volunteered for an early telaprevir study and says he’s been hepatitis-free for three years.

The new drugs do add side effects to the flulike symptoms and other complaints of existing treatment. Telaprevir’s main risk is a rash that is sometimes severe, and boceprevir’s is anemia.

“The future looks very bright beyond telaprevir and boceprevir,” notes Dr. Fred Poordad of Cedars-Sinai Medical Center in Los Angeles, who has studied both drugs and consults for several companies. He points to additional drugs in earlier-stage testing that promise to target more types of hepatitis C and perhaps eventually allow for pillonly, interferon-free treatment.

Manufacturers haven’t said how much the new drugs will add to the price of treatment that already can cost $30,000, albeit far cheaper than a liver transplant.

A stickier issue: Not everyone suffers serious liver damage and it’s hard to predict who will, raising questions about exactly who needs treatment even as drug companies help push for more screening.”

That’s a concern, acknowledges Jeff Levi of the nonprofit Trust for America’s Health, also a screening proponent. But when to treat is a doctor-patient decision, and “anyone with chronic infection you do want to be monitoring so you can intervene at the right moment,” he adds.

Plus, people with hepatitis C should avoid alcohol and consider other liver-protection steps — and know how to avoid infecting others, he stresses.

Stay tuned: The CDC has begun a study at four hospitals — in New York, Detroit, Houston and Birmingham, Ala. — to see if a one-time hepatitis C test for baby boomers makes sense. Among the boomers, black men in their 50s are at particular risk. CDC plans new guidelines next year.

Meanwhile, “start that conversation” at a routine doctor’s visit by asking about hepatitis C risks and testing, Ward advises boomers.