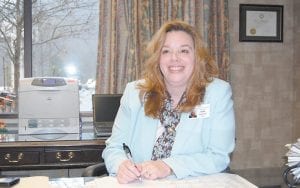 Whitesburg hospital’s new administrator says she is looking forward to getting to work on a project to renovate patient rooms and to becoming an active member of her new community.

Dena C. Sparkman assumed the position of community chief executive officer at Whitesburg Appalachian Regional Hospital on March 12. A native of Wheelwright in Floyd County, she comes to Whitesburg from the Hazard ARH Regional Medical Center, where she was associate administrator.

Sparkman said architects could begin drawing up plans as early as next month for an expansion project to create more private and semi-private rooms at Whitesburg ARH, which she says is necessary to be successful in the future.

“I have a lot of experience in building and construction,” she said. “That’s an area of interest of mine. I like to build stuff. I want to build something.”

She said the renovation, which is expected to be formally approved during the May meeting of ARH’s board of directors, also calls for an updated intensive care unit and other improvements, including a built-in step that will run the length of a baby-viewing window so a sibling can step up and look at his or her new baby brother or sister.

“The design was done with so much employee involvement that I think it will be successful,” said Sparkman.

Sparkman attended a meeting of the Whitesburg Rotary Club on Tuesday and said she looks forward to being a visible member of the community.

Sparkman earned a master’s degree in health administration from the University of Kentucky, a medical technology degree from Duke University, and a bachelor of science degree in biology from Alice Lloyd College. She now has 20 years of healthcare experience, 15 of those with the ARH system. Sparkman is the former administrator of the McDowell ARH.

Sparkman said she and her husband, Duran, and their seven-year-old son, Jake, hope to move to Letcher County soon. She said they have talked about the possibility of building a house near the Raven Rock Golf Course at Jenkins, which she said would please her golf-enthusiast husband.

Sparkman said she agreed to became community CEO at Whitesburg hospital to continue a professional goal of being able to improve healthcare on a large basis.

Sparkman also sees Letcher County is a good place for her family to live.

“It was a good opportunity to move to a community I felt my family would be comfortable in,” she said.

Sparkman said she and other members of the administrative staff at Whitesburg ARH have been busy developing plans to make sure patients receive top care when they visit the hospital.

“It goes back to the patient’s experience,” she said. “Did we make that experience as good as we could for that particular patient? We’re really looking at improving the process.”

“Dena’s experience and educational background will afford her great insight and the preparation she will need to take on the day-today challenges at Whitesburg,” said Wright, who is now ARH’s chief nursing officer.