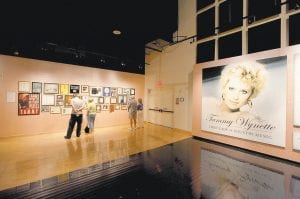 Faith Hill grew up with Tammy Wynette’s music, belting out classics such as “Stand by Your Man” when she was 12 years old — even though Hill probably didn’t quite understand what it truly meant.

Now the country superstar wants to make sure other young girls, and music fans in general, are as acquainted with the “First Lady of Country Music” as she was. Hill has lent her voice to a new exhibit on Wynette at the Country Music Hall of Fame.

“I’m sure there are a few that are aware of Tammy and listen to her music, but you can’t have too many,” said Hill, who narrates a film on Wynette. “Especially with the next generation developing and creating their music, I think it’s important they hear Tammy Wynette.”

Wynette, who died in 1998 at age 55, was the prototype for today’s female country music star. Wynette was one of the first artists to put on a contemporary live show with costume changes and colorful outfits, some of which are on display at the museum.

The exhibit runs through June 12, 2011, along with hundreds of other items from Wynette’s voluminous collection of personal memorabilia. She wore wigs and elaborate jewelry and her style was copied not only around Nashville but across the nation.

She lived a tumultuous life that brought tabloid attention along with the adulation of her fans. And her humble beginnings belied a big personality who could take command of any room.

“She was always so down to earth and so friendly, always there to talk and visit with you,” Reba McEntire said. “And great songs. My gosh, the songs that she sang would touch your heart in a heartbeat, and she was always so identifi able. When she started singing most times when the song started you knew that was a Tammy Wynette song. You never had to guess who was singing that song.”

It was “Apartment No. 9” that hooked author and professed “record hound” Jimmy McDonough on Wynette. He’d never heard anything like the singer’s voice and his curiosity about Wynette eventually led him to write a biography, “Tammy Wynette: Tragic Country Queen,” released last March. Like Hill he thought it was time to take a closer look.

“There’s just something compelling about her voice,” Mc- Donough said. “And I felt in the pantheon of country singers — it’s great the Country Music Hall of Fame is doing this thing — but in recent years you hadn’t heard a lot of Tammy. She sort of faded in the background and I think largely that’s because certain associations people make, especially with her main song, ‘Stand by Your Man,’ which is a much more complex record once you really look at it and listen to it than I think people give it credit for.”