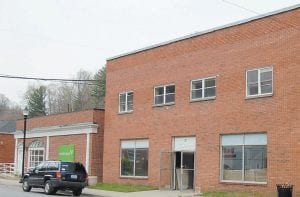 UNDER CONSTRUCTION — The new Jenkins City Hall building on Main Street is a former office building for the old Beth-Elkhorn Coal Corp. and the Jenkins Independent Board of Education. Jenkins Mayor G.C. Kincer hopes the city’s administrative offices can move into their new home in three weeks. (Eagle photo)

Jenkins Mayor G.C. Kincer and his administration hope to move into the new City Hall building in about three weeks.

The Main Street building formerly served as an office building for the old Beth-Elkhorn Coal Corp. It was occupied most recently by the Jenkins Independent Board of Education.

“It’s right in the center of the city,” said Kincer. “I think that is important to increase the visibility of local government.”

Kincer said the current City Hall located at 853 Lakeside Drive is no longer adequate to hold the city’s offices. It is cramped for space with the police department and all other administrative offices sharing surface area of about 3,000 square feet.

“I’m in cell block three of what used to be the old jail,” said Kincer.

DePriest has already moved his office to the new City Hall and has redecorated the office himself with office furniture he purchased for a bargain in Bluefield, W.Va.

Kincer said that in addition to every city office having more room to operate, the city’s access to the Internet will be greatly enhanced with fiber optic connections that can carry as many as 18 T1 lines. Kincer said the lines will allow the city to have real-time streaming broadcasts on the Internet as well as broadcasting on the city’s public access channel.

“That’s one of the things I realized the city needed, is better communication,” said Kincer.

He said the new location will allow for future expansion as needs grow.

“You can see the spaciousness of this place is awesome,” said Kincer. “It’s huge. We are tickled to death. There’s actually more room than what we need.”

The council voted at its January meeting to buy the building for $125,000 from Jenkins businessman James F. “Chum” Tackett. Kincer said it will cost about $100,000 to renovate and the construction is being done in phases as funds come available. Blair Construction LLC has been hired to work in conjunction with city workers to complete the project.

Randy Blair, owner of Blair Construction, said the city offices could be ready to be occupied in about two or three weeks.

When people walk into the main entrance of the building, they will enter a waiting area with open window into the city clerk and water clerk offices. If someone needs to enter the hallway to access the mayor’s office and other offices, a buzzer system will be used to open the hallway door . e

Th mayor’s office is located at the front left of the building and is connected to a large conference room. The mayor’s office will have an ornate metal ceiling, big baseboards, floating flooring, and what Kincer called “pretty” lighting.

“I want it lit very special because that is what creates an atmosphere,” said Kincer. “It’s not just for me, but for mayors to follow. It’ll be a timeless construction. It will last forever. We are doing it right.”

District Five Magistrate Wayne Fleming will also have an office in the new building.

“If we need anything or if he needs anything, he is right here,” said Kincer.

Kincer wants the Jenkins Festival Committee to have an office there as well.

“We’ve got all kinds of room for everybody,” he said.

The city council will meet upstairs in a large assembly room. The ceiling will eventually be raised a foot to make room for a platform on which the city council will sit. An elevator will be installed. The upstairs area will be renovated once the downstairs is finished.

“Anybody in the public that wants to use it can use it,” he said. “There is not a meeting place here other than the library. It is restricted and small. We bought it because the city didn’t have anything like this.”

The police station will be located on the second floor and will include an evidence room.

Kincer said the new building will enhance the city’s ability to bring new businesses to the area.

“When industry comes to our city the first place they come is City Hall,” he said. “And you know what they say about first impressions. You only have one shot at a first impression.”

Kincer said when people walk through the door they are going to know that he and his staff are serious.