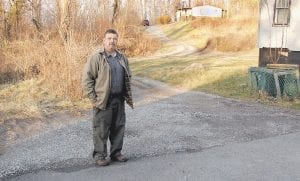 New Jenkins Mayor Todd Depriest stands next to what he calls a “skirt” of blacktop that was laid down two years ago in the Wheaton Hollow area after water line construction. On December 3, 2012, Depriest wrote the City of Jenkins a check for $1,387.84 for a stretch of blacktop that was put down on a private driveway leading to his home on Lucky Hill. The check was later returned by the bank for non-sufficient funds and has never been paid. Depriest now says he doesn’t owe the money. (Eagle photo)

Despite being mayor of the City of Jenkins for only two weeks, Todd Depriest is already facing one unusual item of old business — a $1,387.84 cold check he wrote to the city to pay for blacktop more than two years ago.

City documents obtained by The Mountain Eagle indicate that Depriest wrote a personal check on December 3, 2012 at the insistence of then-Mayor G.C. Kincer Jr. and other city officials. The payment was for blacktop that Kincer and others believed had been put down illegally on a private road leading to the home of Depriest, who was then employed as Jenkins City Administrator.

On December 19, 2012, Whitaker Bank returned the check to the city, citing “not sufficient funds” in Depriest’s account with Community Trust Bank as the reason. Whitaker Bank did not charge the city a fee for the returned check.

On February 1, 2013 — about six weeks after the check was returned — Kincer advised Depriest in writing that “it will soon be 60 days since we have received notice from Whitaker Bank that your check was returned. Again I will address this matter with you and hope that you might be able to make retribution to the city for this returned check. With the compassion of the city council and myself, we hope this notice might find you in a position that you will be able to complete this transaction.”

The Mountain Eagle obtained this photocopy of a returned check through Kentucky’s Open Records Law.

The matter was not again addressed — by Kincer, the city council, or Depriest — during the 22 months after Kincer’s letter was delivered to Depriest.

The Mountain Eagle learned about the returned check early this past November, and in late December obtained a copy of the notice Whitaker Bank sent to the city. In addition to the bank notice and a copy of the check, which were provided after The Eagle filed an open records request December 23, the newspaper was also given a copy of the letter from Kincer to Depriest, a copy of a blacktop construction proposal from Mountain Enterprises Inc. of Lexington, and an undated “incident report” concerning the blacktopping and Depriest’s check. 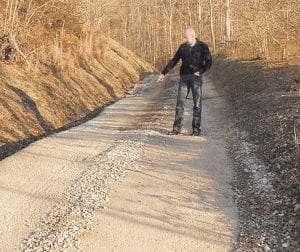 Jenkins City Administrator Bennie McCall points to the spot where the blacktop laid down two years ago ends and the dirt road leading to the home of Mayor Todd Depriest begins. (Eagle photo)

Depriest, who unseated Kincer by 10 votes in the November election, told The Eagle he knew the check was returned but made no arrangements to cover the $1,387.84 because he thought the matter had been dropped with the approval of the Jenkins City Council.

“There’s nothing to it,” Depriest said last week from his new office in Jenkins City Hall.

“He (Mayor Kincer) shouldn’t have sent the check through to begin with,” said new City Administrator Bennie McCall, who was present for the interview. McCall, the city’s revenue officer at the time the check was written and returned, was promoted to his new job after Depriest took office last week.

According to the incident report obtained by The Eagle, Kincer was informed on December 1, 2012 that blacktop purchased by the city had been placed on a road controlled by Depriest. The report said that on the next day, a Sunday, Kincer and “City Outside Supervisor” Scotty Church drove to the location in question, Lucky Hill Road in Wheaton Hollow, and determined that some blacktop had been placed improperly on private property.

Says the report: “On Monday morning (December 3, 2012) at approximately 11 a.m., Mayor Kincer contacted City Attorney Randall Tackett and Kentucky League of Cities ( Deputy Executive Director) J.D. Chaney for advice on how to handle this situation. Both advised Mayor Kincer to suspend Todd for five days without pay and [to require him] to reimburse the city immediately for the cost of the blacktop. Mayor Kincer, Mayor Pro-tem (Robert E. ‘Pud’) Shubert, and Todd Depriest met in Kincer’s office to discuss the incident. After Todd was informed of the accusations, Todd then admitted to having the blacktop placed on said properties. Mayor Kincer asked that this be reimbursed to the City of Jenkins Road Fund immediately. Todd then left Mayor Kincer’s [office] to get an invoice for the blacktop … [and] presented Mayor Kincer a check in the amount of $1,387.84.”

Depriest’s house is located high on Lucky Hill, where he and his neighbors have an enviable view of Elkhorn Lake below. The scenic lake, built by Consolidation Coal Company in 1912, serves as the city’s water reservoir. The road is very steep, with the blacktop on Lucky Hill ending several yards below Depriest’s home.

At issue is whether an 11-foot wide by 178-foot long strip of blacktop that is 1- 1/ 4 inches deep — the amount of blacktop Depriest’s check was intended to pay for — was applied to the end of the road as a favor to Depriest or instead put down by the paving company, Mountain Enterprises Inc., to repair property damages by contractor H2O Construction of Pikeville caused while it was installing water and sewer lines in the area.

Depriest says the road leading to his home is actually owned by neighbor James Hopkins, who is also a city employee, but that Hopkins has given him an easement to use the road. He maintains that the blacktop laid down on the road covers only the distance that was disturbed by H2O Construction during what the city refers to as “Phase of the Lakeside Waterline Improvement Project.”

Documents indicate that the City of Jenkins contracted with Mountain Enterprises to put down 690 tons of blacktop at a cost of $45,798.72 to repair damages the water line installation caused to public streets and private drives that had been paved previously at their owner’s expense.

“ I was the city administrator and went around with H2O,” Depriest said. “My thing was to make sure they put everybody’s property back. On projects like this you don’t leave a place in worse shape than you found it.”

According to Depriest, most blacktop laid down by Mountain Enterprises came in the form of what he called small “skirts” to restore smooth access to private property that had been damaged. The Lucky Street project, which documents show called for 16 tons of blacktop, included two such “skirts” on each side of the road leading through Hopkins’s property in addition to the longer stretch leading up the hill to Depriest’s home.

“ I would never have taken a chance at losing my job over something like this,” Depriest said.

During their interview at Jenkins City Hall last week, both Depriest and McCall provided The Eagle with the minutes of the December 3, 2012 meeting. Included in the contents of the two-page document, they said, is a paragraph that proves the city council did not intend for Depriest to pay the $1,387.84 cost of the blacktop.

The paragraph says: “Becky [Council Member Rebecca Terrill- Amburgey] made a motion to go into executive session to discuss a personnel matter. Rick [Damron] seconded the motion. After approximately 20 minutes, Becky made a motion to go back into regular session. Rick seconded the motion. All council members were in agreement. Mayor Kincer reported that there will be no action taken in reference to the personnel matter discussed in executive session.”

While the minutes are at odds with the “incident report” that says the council did away with Kincer’s proposed five-day suspension of Depriest but asked that he reimburse the cost of the blacktop to the road department, there is still the question of why Depriest wrote the check if he didn’t think he owed the money to the city.

Depriest said he wrote the check because Kincer “got all stirred up and torn up and said ‘you’re going to have to pay that amount’ because he wasn’t going to jail over it like Randy did in Knott County.”

“Randy” is Randy Thompson, the former Knott County judge/ executive who was convicted in federal court in a highly publicized case that involved Thompson and three other county employees allowing blacktop and gravels to be laid down on private roads in exchange for votes.

Depriest said he had written the check at about the same time the issue went before the city council and forgot to mention it to Kincer later.

Said Depriest, “I should have said, ‘Where’s my check? I need to put it up or do something with it.’”

“It’s weird to hear about it now,” Depriest added.

“The whole thing is a bad deal,” said McCall. “ None of this is Todd’s fault.”

Asked where the original check is now, McCall said it is “still here, I guess. We’ve not seen it.”

Kincer declined to be interviewed about the matter.