The new overlook on US 23 near Pound Gap got a new name last week. It will now be called the Combs Overlook, named for well-known Kentucky State Police Trooper Bennett David Combs, of Ice, who died in August 2014 after a long illness. He was 55.

A parade of friends and relatives stepped to the podium at the overlook on Friday to remember Combs and prepare for a ribbon cutting on the new recreation/tourism area. The Combs family sponsored the build, and family members and friends came from all over the state for the event. State troopers and detectives assigned to Letcher County as well as the Post 13 captain and lieutenant attended to represent the agency.

Jenkins Mayor Todd Depriest said he was going to police academy when he met Combs. He took Depriest under his wing, the mayor said, and helped him as a young deputy sheriff.

“He was a pal,” Depriest said. “He was someone you could talk to about what was going on with the police and all the crazy stuff that happens.” 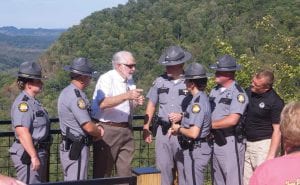 Depriest left law enforcement after three years, but Combs stayed until retirement, and then moved on to be head of security for Mountain Comprehensive Health Corp.

Letcher County Judge/ Executive Terry Adams said the tourism commission could not have dedicated the site to a better person than Combs.

“When he was a city cop in Whitesburg, I was a teenager,” Adams said. “We were in a little trouble from time to time, and he was always there to straighten us out.”

District 94 State Rep. Angie Hatton noted that Combs was always raising money to help underprivileged children in Kentucky, and “spent as much time helping children as he did on his police duties.”

“The Kentucky State Police even has a David Combs Award for the trooper who does the most for children,” Hatton said.

Hatton was joined by District 97 State Rep. Bobby McCool, who attended high school with Combs. McCool said Combs and he went to the state police academy together, but Combs got in and he didn’t, despite Combs’s encouragement to keep trying. He said he doesn’t remember Combs ever speaking a bad word about anyone. 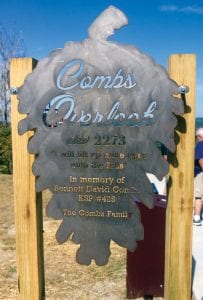 The distinctive Letcher County Tourism Sign at the new overlook near Pound Gap bears the name of the late Kentucky State Police Trooper Bennett David Combs, and the inscription, “I will lift up mine eyes to the hills.”

“He was certainly an impact on my life forever,” McCool said.

The overlook was sponsored by Combs’s family. Letcher County Tourism Chairwoman Missy Matthews said she spent about two hours talking to Combs’s sister, state Deputy Director of Tourism Regina Stivers, before she accepted her appointment to the commission, and David came up then. Then Mayor Depriest asked if the commission would build an overlook like the ones near Whitesburg, and HOMES Inc. contacted her to tell her it had volunteers in town who could help build the area, and then offered to build a picnic shelter if tourism would provide the lumber. Matthews said in the end, it was a joint effort of the City of Jenkins, the county tourism commission, HOMES Inc., the Combs family, volunteers, Extension Agent Shad Baker, local companies such as Rustic Rooster, Taylor Metal, and her “work family” at Childers Oil, of which she is CEO. 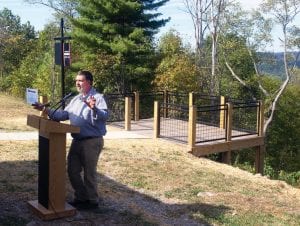 Jenkins Mayor Todd Depriest described David Combs as “a pal,” to whom he could talk about the things that police officers see when he served as a deputy sheriff and Combs was a trooper.

“He (Trooper Combs) never came in for those kinds of things,” she said. “When he came, he wanted a check for Trooper Island.”

The island on Dale Hollow Lake is a training facility for troopers and a summer camp for children who need mentoring. Melissa Blair, whose parents on a home on the lake, said she grew up around Combs, and her husband has been a police officer his whole life. When her parents moved permanently to the lake, her mother got a job cooking on Trooper Island, and told her Combs was “The Man” during summer camp. While most other troopers would jump on a boat and go fishing, she said Combs spent all his time with the kids, and at breakfast with them every morning. If there were empty spaces at camp, he would invite her brother, Shaler Jones, to attend, and now her brother is a trooper. She read a note from him from the podium, saying how important Combs was to him, how he told him how to prepare for police academy and kept in touch with him while he was there. 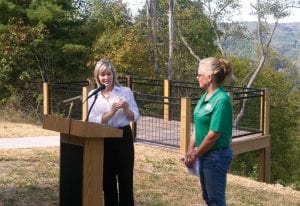 “David Combs would have done anything for anyone if it was for the greater good,” Jones wrote.

Combs’s sister, now the Deputy Secretary of Kentucky Tourism, Arts & Heritage and married to the state Senate President Robert Stivers, said Combs was on the marijuana SWAT team, taught DARE classes in school, and spent several years undercover because he wanted to eradicate drug dealing. She pointed out a bench next to the shelter with her brother’s badge number, 425, or as coworkers called him, “Four and a Quarter,” and a signs next to the overlook with a Bible verse.

“When we came up here the first time to the overlook, my husband mention the Bible verse, ‘I will lift up mine eyes to the hills,’ and now that is on the sign for the overlook,” she said.

Stivers noted that Matthews had overseen construction of five overlooks on Pine Mountain within six weeks of accepting the appointment to the county tourism commission by pulling people together from all over the county to help.

“If we would all do that every day, what a county we would have,” Stivers said.

She awarded Matthews a Tourism, Arts & Heritage challenge coin for her work.

Depriest was pleased with overlook, which is already getting a steady stream of tourists as they cross from Virginia into Kentucky. He said the county has hiking, hunting, fishing, entertainment, and said the overlooks are as nice as any he’s seen anywhere. He encouraged residents to stop looking Letcher County as though there’s nothing to do here.

“Talk to your family,” Depriest told the crowd. “People say there’s nothing to do around here. Tell them there’s plenty to do.”