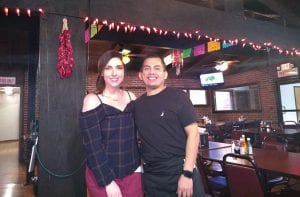 NEW RESAURATEUR – Javier Navarro and Olivia Hall stand inside Paco’s Mexican Restaurant in Jenkins. Navarro worked at the restaurant when it was under the previous ownership, but now he owns the business.

Jenkins has a Mexican restaurant again.

Jose Javier Navarro, 27, worked Los Peñas restaurants in Whitesburg and Jenkins for 10 years — three in Jenkins — and worked at Sazon when his longtime employer shut down.

But Navarro’s dream was to own a restaurant of his own, and when the City of Jenkins sought another restaurant to go into the building it owns near the swimming pool, he decided the time was right.

On Monday, he opened up Paco’s Mexican Restaurant in the same building where Los Peñas was located.

That afternoon, people flowed in and out the door of the restaurant, shaking his hand and hugging him before leaving.

“The people here were really nice to me,” Navarro said, reflecting on his time working in Jenkins. Navarro said he sometimes worked seven days a week at Los Peñas. While he knows the work running a restaurant himself will be hard, he’ll be his own boss and be able to do what he wants and the customers want with the menu and atmosphere. 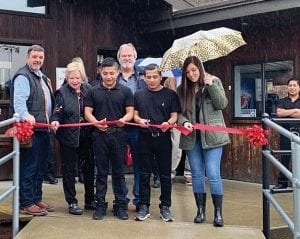 Navarro is a native of Guerrero near Mexico City, and he wants to bring some of his home into his restaurant in Jenkins.

“The most I miss in Mexico is the food,” he said.

“I never in my life in Mexico had a chimichanga until I moved here,” he said.

Navarro plans to change that, bringing a taste of real Mexican food to Jenkins, in addition to the Tex-Mex or Texican food most people are used to.

“The menu used to be one page. My menu is six pages,” he said.

And it includes a variety of dishes, not just Mexican food. On Monday, he and his girlfriend and waitress, Olivia Hall, were having barbecued ribs.

Navarro is also planning to have karaoke, and has applied for a liquor license so he can serve beer, wine and mixed drinks, though he said he probably won’t serve mixed drinks until after 2 p.m. He promised especially good margaritas.

Navarro said the changes are in response to his customers’ requests when he worked as a waiter and bussed tables.