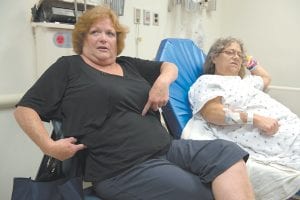 Brenda Hudson listens as her sister Michelle Tucker shows her scar length from donating her kidney to Brenda 40 years ago. When this photo was taken June 28, Hudson was about to undergo a second living donor kidney transplant, this time with her husband as donor, at MedStar Georgetown University Hospital in Washington. More than 120,000 people are on the nation’s waiting list for an organ transplant, most of them for kidneys, and thousands die before receiving one because of a dire shortage of donors. (AP Photo)

Brenda Hudson recalls weeks spent in a glass-enclosed isolation room after her first kidney transplant, her family allowed to visit only when suited up against germs.

That transplant lasted a remarkable four decades — and now Hudson’s recovery from a second one, this time faster and surrounded by germy visitors, showcases how far organ transplants have come and the hurdles that still await.

“I’m ready to be well again,” Hudson exclaimed before being wheeled into an operating room at Med- Star Georgetown University Hospital last month, far more confident than back at age 17 when she was that hospital’s first recipient of a living-donor kidney.

Transplants still require courage, but medical advances haven’t just helped patients. Hudson’s initial donor, her older sister, has a scar stretching from belly to side where doctors cut into her rib cage. This time Hudson’s husband donated, and went home two days after surgeons squeezed his kidney through a roughly 3-inch incision.

Hudson’s own lupusdamaged kidneys were removed about a month before her first transplant. That’s hardly ever done anymore — nonworking kidneys shrink to make room.

Back then, finding a donor was pretty miraculous.

And with more than 120,000 people on the national waiting list for a kidney or other donated organ — but only about 30,000 transplants performed each year — new moves are getting underway to try to ease the critical shortage.

Efforts range from smartphone apps letting wouldbe donors register with a few clicks, to helping transplant centers use some organs that today would be discarded for fear they’re not good enough.

“I really didn’t think about getting another kidney. How could I be that fortunate?” said Hudson, 57, of Owings, Maryland, who this time went home five days after surgery. Her thoughts strayed to friends on dialysis: “I just wish we could see more donors coming out.”

The average kidney from a deceased donor lasts 10 years, while one from a living donor averages about 15 years, said Dr. David Klassen of UNOS, the United Network for Organ Sharing, which oversees the nation’s transplant system. Doctors can’t explain why occasionally people like Hudson beat those odds by a lot.

Dana Hudson knew his wife wouldn’t ask for another kidney so when her first deteriorated badly enough to require dialysis, he volunteered.

Sewing it into its new owner, however, would prove nerve-wracking.

More than 6,000 people died last year waiting for a new kidney, liver, lung or other organ, according to UNOS.

Last month, the White House issued a call to reduce the wait, and highlighted $160 million in regenerative research that one day might offer alternative therapies.

Kidneys are most in demand, with nearly 100,000 people on the national transplant list awaiting one.

“Without a transplant, we lose way too many people,” said Georgetown’s Cooper. “It’s just an organ supply problem.”

To try boosting that supply:

—Apple says its upcoming software update will let iPhone users register as an organ donor through its health app, linking to Donate Life America’s national registry. Georgetown also is developing an app for smartphones and tablets that will allow a click for donor registration.

—Studies are underway to preserve donated organs longer by pumping them with oxygenated fluids, and to spur use of higher-risk organs that work despite not being in optimal condition, Klassen said.

—And the University of Pittsburgh Medical Center and Donate Life launched a new Facebook page to educate the public about the need for living donors; fewer than 6,000 every year give a kidney or part of their liver.

It’s hard to ask, and there are some disincentives. A living donor’s surgery is covered by the recipient’s insurance but not related costs such as lost wages. Dana Hudson expects to be away from his truck-driving job for about four weeks but said, “The most important thing is that she gets better.”

Back at Georgetown, where about a third of kidney transplants now are from living donors, Dana Hudson underwent a battery of tests to be sure he was healthy enough to live with one kidney.

The “keyhole” surgery used for living donation today is easier on patients but trickier for surgeons. Guided by a miniature camera, Dr. Seyed Ghasemian inserted long-handled probes through tiny abdominal incisions and painstakingly snipped the kidney free from surrounding tissue. It was producing plenty of urine and had great blood vessels, Ghasemian reported.

But he paused before severing that blood supply, the point of no return. Across the hall, Cooper had found a problem with Brenda Hudson.

Hunched tensely over the operating table, Cooper was uncovering arteries hardened by high blood pressure and Type 2 diabetes — no good for sewing on her husband’s kidney.

Finally the surgeons devised a way for blood vessels to feed the incoming organ. “This was not an easy case,” Cooper said. “You have to have a Plan B.”