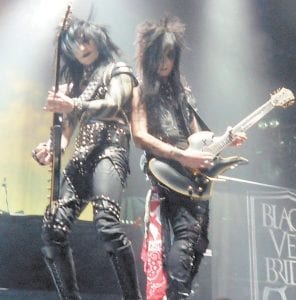 Guitarists Jake Pitts and Jinxx perform with their band Black Veil Brides in Pikeville last week at a show headlined by Avenged Sevenfold.

The line that started forming at the Eastern Kentucky Expo Center and curved its way into the streets of Pikeville made it clear the starstudded “Buried Alive Tour” was highly anticipated.

This is the second such tour that headliners Avenged Sevenfold have embarked on in support of their fifth studio album “Nightmare.” Wanting to make this tour even better then the first “Nightmare” tour, Avenged Sevenfold enlisted three top-of-the-line and heavily praised bands as opening acts — Black Veil Brides, Asking Alexandria, and Hollywood Undead. So when the doors were finally opened and the crowd rushed in and took their spots in front of the stage, they were more than ready to enjoy the delights this heavy metal carnival was sure to bring.

The first group to perform was the Black Veil Brides of Hollywood, California. Before the band came out, bright strobe lights lit up the arena and flashed for what seemed like an eternity, creating a surge of anticipation through the crowd. Then in a blink of an eye, drummer Christian “CC” Coma appeared standing atop his drum set. This act ignited the crowd in applause while the rest of the band, lead singer Andy Biersack, bassist Ashley Purdy, and guitarists Jake Pitts and Jinxx took to the stage. 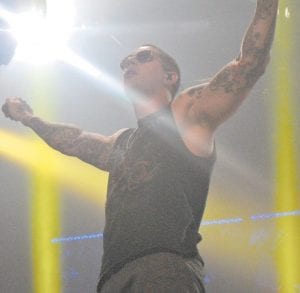 With all five members of the make- up wearing glam metal band onstage, the strobe lights took their final blink and the band began to play. The group, wanting to pack a lot in during the short time allotted, quickly burned through several songs from their 2011 album “Set the World on Fire” and even had time for a cover of Billy Idol’s “Rebel Yell.” Though their opening set was short, Black Veil Brides left a huge impression on the crowd and made the task of following them a challenge.

Taking that challenge was the British “metalcore” band Asking Alexandria. With members Ben Bruce on lead guitar, Cameron Lidell on rhythm guitar, Sam Bettley on bass guitar and James Cassells on drums already on the stage and beginning to play, front man Danny Worsnop soon followed while proudly waving a United Kingdom flag with the band’s symbol imprinted on it. Worsnop and his fellow band members instantly began roaring through their set in nonstop motion, running from side to side, jumping and making sure that the crowd never lost interest. They did this for the entire set, and by the end the crowd had split apart to form a “death wall” in which they moshed for the rest of the Asking Alexandria performance. 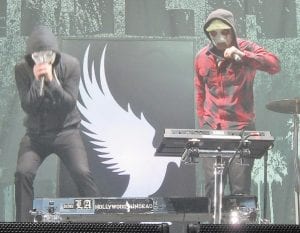 Members of the Los Angeles rap rock band Hollywood Undead perform. The band was one of four who played the Eastern Kentucky Expo Center in Pikeville as part of Avenged Sevenfold’s “Buried Alive Tour.”

After the band left the stage and the mosh pit members were still recovering, all six members of Hollywood Undead stormed the stage. Sporting their signature masks and shouting their infamous raps, the group made it clear that they were not your average rap metal band. Halfway through their set, group members shed their masks and held nothing back — singing to a crowd that returned the favor by joining in on the band’s wellknown songs. After this aggressive set, it was an understatement to say the Expo Center stage was warmed up for the night’s main act, Avenged Sevenfold.

After Hollywood Undead left the stage, a large black curtain was lifted to conceal the stage. This excited the crowd, but after 40 minutes of waiting to see what was behind it the audience grew impatient. When the curtain was finally moved and the eerie beginning of Avenged Sevenfold’s “ Nightmare” could be heard, crowd members knew the group would soon follow.

As singer M. Shadows, rhythm guitarist Zacky Vengeance, lead guitarist Synyster Gates, bassist Johnny Christ, and drummer Arin Ilejay took the stage, flames lit up to unveil what the curtain had concealed. After performing the song “Nightmare,” Avenged Sevenfold began its second song, “Critical Acclaim,” when the early pyrotechnics proved too much for the small stage at the Expo Center and a curtain hanging above the stage caught fire. This immediately halted the show as members of the band stepped forward so the small flames could be extinguished. Once things were quickly brought under control, the group stepped back behind their microphones and instruments, but this was not the last appearance of fire, for it weaved throughout the performance.

With the pyrotechnics continuing, the group made their way through what would become an 11-song set. But the most memorable and moving appearance of flames did not come from the stage, but came instead from the hands of audience members when the group sang their latest hit “So Far Away.” The song was written in memory of the group’s late drummer Jimmy “The Rev” Sullivan.

Sullivan, who died in 2009, helped found the band in Huntington Beach, Calif., in 1999. While “So Far Away” was being performed, every lighter in the building was held up in a show of respect for the late founding member. Even those who had no lighters contributed as they held their cell phones up. The band was clearly moved by this act.

After the song was over, the show continued as Avenged Sevenfold played more hits and the crowd formed a huge circle mosh pit that even earned the praises of M. Shadows. But after the last song was sung and the band left the stage and eventually left Pikeville, it was easy to say the best part of the show was the performance of “So Far Away.”

Much like the song’s lyrics say, “and the light you left remains but it’s so far away,” Avenged Sevenfold may now be far away from the small towns of eastern Kentucky, but the memories of their Nov. 29 concert will always burn like the lighters being held high by the crowd.