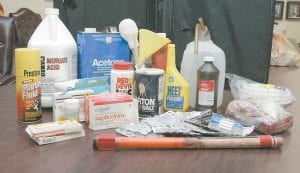 METH INGREDIENTS EASY TO FIND — “Everything you make it with you can buy at Walmart,” Letcher County Sheriff Danny Webb says of the meth labs now being operated by mostly smalltime dealers or users trying to supply their habits. (AP photo)

lab discovered at Isom this
week by officers with the Letcher
County Sheriff’s Department and
other agencies is nearly identical to
what is described in this report by
The Associated Press.

This is the new formula for methamphetamine: a two-liter soda bottle, a few handfuls of cold pills and some noxious chemicals. Shake the bottle and the volatile reaction produces one of the world’s most addictive drugs.

Only a few years ago, making meth required an elaborate lab — with filthy containers simmering over open flames, cans of flammable liquids and hundreds of pills. The process gave off foul odors, sometimes sparked explosions and was so hard to conceal that dealers often “cooked” their drugs in rural areas.

But now drug users are making their own meth in small batches using a faster, cheaper and much simpler method with ingredients that can be carried in a knapsack and mixed on the run. The “shakeand bake” approach has become popular because it requires a relatively small number of pills of the decongestant pseudoephedrine — an amount easily obtained under even the toughest anti-meth laws that have been adopted across the nation to restrict large purchases of some cold medication.

“Somebody somewhere said ‘Wait this requires a lot less pseudoephedrine, and I can fly under the radar,’” said Mark Woodward, spokesman for the Oklahoma Bureau of Narcotics and Dangerous Drugs Control.

An Associated Press review of lab seizures and interviews with state and federal law enforcement agents found that the new method is rapidly spreading across the nation’s midsection and is contributing to a spike in the number of meth cases after years of declining arrests.

The new formula does away with the clutter of typical meth labs, and it can turn the back seat of a car or a bathroom stall into a makeshift drug factory. Some addicts have even made the drug while driving.

The pills are crushed, combined with some common household chemicals and then shaken in the soda bottle. No flame is required.

Using the new formula, batches of meth are much smaller but just as dangerous as the old system, which sometimes produces powerful explosions, touches off intense fires and releases drug ingredients that must be handled as toxic waste.

“If there is any oxygen at all in the bottle, it has a propensity to make a giant fireball,” said Sgt. Jason Clark of the Missouri State Highway Patrol’s Division of Drug and Crime Control. “You’re not dealing with rocket scientists here anyway. If they get unlucky at all, it can have a very devastating reaction.”

One little mistake, such as unscrewing the bottle cap too fast, can result in a huge blast, and police in Alabama, Oklahoma and other states have linked dozens of flash fires this year — some of them fatal — to meth manufacturing.

“Every meth recipe is dangerous, but in this one, if you don’t shake it just right, you can build up too much pressure, and the container can pop,” Woodward said.

When fire broke out in older labs, “it was usually on a stove in a back room or garage and people would just run, but when these things pop, you see more extreme burns because they are holding it. There are more fires and more burns because of the close proximity, whether it’s on a couch or driving down the road.”

After the chemical reaction, what’s left is a crystalline powder that users smoke, snort or inject. They often discard the bottle, which now contains a poisonous brown and white sludge. Dozens of reports describe toxic bottles strewn along highways and rural roads in states with the worst meth problems.

The do-it-yourself method creates just enough meth for a few hits, allowing users to make their own doses instead of buying massproduced drugs from a dealer.

“It simplified the process so much that everybody’s making their own dope,” said Kevin Williams, sheriff of Marion County, Ala., about 80 miles west of Birmingham. “It can be your nextdoor neighbor doing it. It can be one of your family members living downstairs in the basement.”

A typical meth lab would normally take days to generate a fullsize batch of meth, which would require a heat source and dozens, maybe hundreds, of boxes of cold pills.

But because the new method uses far less pseudoephedrine, small-time users are able to make the drug in spite of a federal law that bars customers from buying more than 9 grams — roughly 300 pills — a month.

The federal government and dozens of states adopted restrictions on pseudoephedrine in 2005, and the number of lab busts fell dramatically.

The total number of clandestine meth lab incidents reported to the Drug Enforcement Administration fell from almost 17,400 in 2003 to just 7,347 in 2006.

But the number of busts has begun to climb again, and some authorities blame the shake-andbake method for renewing meth activity.

The AP review of 14 states found:

— At least 10 states reported increases in meth lab seizures or meth-related arrests from 2007 to 2008.

— The Mississippi State Crime Lab participated in 457 meth incidents through May 31, up from 122 for the same period a year ago — a nearly 275 percent increase.

— Several states, such as Oklahoma and Tennessee, are on pace this year to double the number of labs busted in 2008. The director of Tennessee’s meth task force said the pace of lab busts in his state is projected to be about 1,300 for 2009, compared with 815 for all of 2008.

Some states lack a central database to monitor cold medicine sales, so meth cooks circumvent state laws by pill shopping in multiple cities and states — a practice known as “smurfing” that allows them to stay under restrictions placed on sales.

Traci Fruit, a special agent with the Kansas Bureau of Investigation, said law enforcement officials are becoming increasingly frustrated because there’s no way to tell who is buying what “unless we go from store to store ourselves and pull up the records.”

Historically, rural states like Oklahoma, Missouri and Kansas have been hotbeds for meth use because an important ingredient in the traditional method, anhydrous ammonia, was easily available from tanks on farms where it’s used as a fertilizer. But the new formula does not need anhydrous ammonia and instead uses ammonium nitrate, a compound easily found in instant cold packs that can be purchased at any drug store.

Data from the Justice Department and the DEA data suggest the method could only be in its early stages, and “shake-andbake” labs have recently been discovered as far north as Indiana and as far east as West Virginia.

While many law enforcement agencies are just learning how to spot the new labs, other states are rushing to close loopholes in laws limiting the sale of meth ingredients.

Mississippi Sen. Sid Albritton, said that state’s law — modeled after Oklahoma’s — forces buyers to show identification and makes stores keep a log of cold medicine sales. But the problem in Mississippi is lack of technology to instantly log purchases in a central database.

“You have to understand going in that drugs are an evolutionary process,” said Albritton, a former police detective and narcotics officer. “The day after we pass a law, they are going to look for ways to circumvent that.”