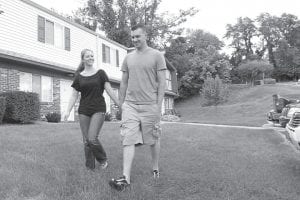 Marine Sgt. Ron Strang, right, walked recently with his girlfriend, Monica Michna, in the yard by his home near Pittsburgh. In 2008, the federal government created AFIRM, the Armed Forces Institute of Regenerative Medicine, a network of top hospitals and universities around the country, and gave $300 million in grants to spur new treatments using cell science and advanced plastic surgery. Strang is among those benefiting. (AP Photo)

Scientists are growing ears, bone and skin in the lab, and doctors are planning more face transplants and other extreme plastic surgeries. Around the country, the most advanced medical tools that exist are now being deployed to help America’s newest veterans and wounded troops.

— In Los Angeles, surgeons used part of Michael Mills’ forehead to rebuild his nose after a bomb disfi gured him in Iraq.

— In Pittsburgh, doctors used an experimental therapy from pig tissue to help regrow part of a thigh muscle that Ron Strang lost in a blast in Afghanistan.

— In Boston, scientists are making plans for the first implants of lab-grown ears for wounded troops after successful experiments in sheep and rats.

— In San Antonio and other cities, doctors are testing sprayed-on skin cells and lab-made sheets of skin to heal burns and other wounds. The ingenuity is impressive: One product was developed from foreskin left over from circumcisions.

Much of this comes from taxpayer-funded research. Four years ago, the federal government created AFIRM, the Armed Forces Institute of Regenerative Medicine, a network of top hospitals and universities, and gave $300 million in grants to spur new treatments using cell science and advanced plastic surgery.

“The whole idea is to bring all these researchers together to develop these great technologies that were in early science to eventually be ready for the troops,” said AFIRM’s recently retired director, Terry Irgens.

Now those who served are coming home, and projects that once had been languishing in labs are making strides and starting to move into clinics.

Strang is among those benefiting. The 28-year-old Marine sergeant from Pittsburgh lost half of a thigh muscle to shrapnel, leaving too little to stabilize his gait. “My knee would buckle and I’d fall over,” he said.

Now, after an experimental treatment at the University of Pittsburgh Medical Center, “I’m able to run a little bit” and play a light football game with friends, he said. “It’s been a huge improvement.”

It’s one example of the “new medicine” in the works for troops. The Associated Press conducted more than a dozen interviews and reviewed the latest medical research to measure the progress and extent of novel treatments under way for wounded warriors. The results point to some surprising feats of surgery and bioengineering.

Up to a thousand troops might need an ear, and prosthetics are not a great solution. A rod or other fastener is required to attach them to the head. They don’t look or feel natural and they wear out every couple of years. A matching ear grown from a patient’s own cells would be a huge improvement.

“People have been working on this for 20 years” but haven’t been able to overcome obstacles to making it practical, said Cathryn Sundback, director of the tissue engineering lab at Massachusetts General Hospital.

Her lab thinks it’s found the solution. Using a computer model of a patient’s remaining ear, scientists craft a titanium framework covered in collagen, the stuff that gives skin elasticity and strength.

They take a snip of cartilage from inside the nose or between the ribs and seed the scaffold with these cells. This is incubated for about two weeks in a lab dish to grow more cartilage. When it’s ready to implant, a skin graft is taken from the patient to cover the cartilage and the ear is stitched into place.

Scientists in her lab have maintained lab-grown sheep ears on those animals for 20 weeks, proving it can be done successfully and last long-term. They also have grown anatomically correct human ears from cells. These have been implanted on the backs of lab rats to keep them nourished and allow further research. But that wouldn’t happen with ears destined for patients — they would just be grown in a lab dish until they’re ready to implant.

“We’ve solved all the technical problems,” Sundback said, and now they are ready to seek approval from the Food and Drug Administration to implant these into patients — probably in about a year. “It’s amazing how much progress we’ve made with the AFIRM funding.”

A soldier lucky enough to keep his arms and legs after a bomb blast still might lose so much of a key muscle, like biceps or quadriceps, that the limb can’t be used properly. In some cases, “the patient has lost so much muscle that there’s nothing left for the surgeon to sew together,” said Dr. Stephen Badylak, a regenerative medicine specialist at the University of Pittsburgh.

He is testing implants of “extracellular matrix” — connective tissue that holds cells together — to boost muscle mass. The matrix is thought to release chemical signals that promote regrowth of healthy tissue instead of scar tissue.

“It changes the body from thinking, ‘I need to respond to injured tissue,’ to ‘I need to rebuild this tissue,’” Badylak said.

The material is supplied by a private company — ACell Inc. of Columbia, Md. — and comes from pigs. The immune system tolerates it because it doesn’t contain cells. It comes in multilayered sheets like slightly stiff gauze and can be cut or molded to fit the needed shape.

Strang, who lost half of a thigh muscle, is among the five patients treated so far in an 80-patient study. Doctors wait at least six months after an injury to make sure all natural healing has occurred, and put patients through intensive physical therapy before implanting the matrix.

“We want to be able to say after the surgery that they were as good as they could be” and that the matrix accounted for any improvement, Badylak explained.

Beyond “bionic arms” to transplants

For all the advances that have been made in modern prosthetics, the arms and hands are not as effective as the legs and feet. Dozens of wounded troops would rather try a transplant.

The government also estimates that up to 200 troops might need face transplants, although Dr. Bohdan Pomahac, a Boston surgeon who has done four face transplants on non-military patients, thinks only 50 to 100 ultimately will get one.

One reason is the lifelong drugs needed to prevent rejection. They have side effects and raise the risk of cancer.

Many troops remain disfi gured or impaired despite multiple reconstructive operations. Tackling the toughest cases is the goal of Operation Mend, a program of the UCLA Medical Center, Brooke Army Medical Center in San Antonio and the Veterans Affairs-Greater Los Angeles Healthcare System.

Army Staff Sgt. Michael Mills, 47, who lives in Freeport, Minn., northwest of Minneapolis, is one such patient. He was injured in Iraq in 2005 by a bomb that left him with major burns and broken bones all over. He lost a finger and thumb. He has a dozen pins in bones and a plate in his hip. He was missing part of an ear and part of his nose.

Mills had 10 surgeries with Operation Mend, including three on his hands. Surgeons repaired his nose with part of his forehead.

“I’m very happy with the new look I have now,” Mills said. “I don’t let my disability run my life. I run my disability.”