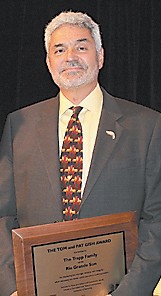 Robert B. Trapp with the Tom & Pat Gish Award in Lexington.

Members of a New Mexico family who have fought for open records and meeting rights for nearly 60 years in one of the poorest counties in the nation is the recipient of the 2015 Tom and Pat Gish Award.

The Sun is known for fighting “the crooks and crooked politicians, the declining health, and educational systems,” said Ben Daitz, producer of a 2012 documentary about the Trapps, “The Sun Never Sets.”

“A geologic feast of rocks, all thrown through the Sun’s windows over almost 60 years, is displayed on shelves around the press- room,” Daitz wrote in a nomination for the Tom and Pat Gish Award.

The newspaper office was firebombed in April, but Daitz said the damage was contained and the presses still ran.

“(Robert E.) Trapp did not care what advertisers thought, and neither does his son, and the paper still sells out every week,” said Daitz.

Robert B. Trapp accepted the Tom and Pat Gish Award on October 29 during the Al Smith Awards Dinner at the Marriott Griffin Gate Resort in Lexington. The award was created in 2005 by the University of Kentucky’s Institute for Rural Journalism and Community Issues to honor the late Tom and Pat Gish, owners and publishers of The Mountain Eagle newspaper in Whitesburg.