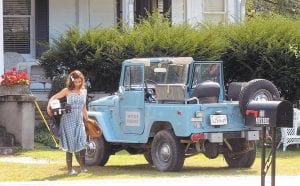 The town Big Stone Gap, Va. has several events planned for Saturday to celebrate the movie’s opening weekend. Adriana Trigiani, writer and director of the movie and author of the novel “Big Stone Gap,” and some of the stars of the movie are expected to be in town this weekend.

With Trigiani’s movie filmed entirely on location in Big Stone Gap, Va. and surrounding areas in Virginia, Cinema City 9 staff anticipate a large number of people wanting to see the flick on its opening night. The movie launches in Wise County, Va. on Oct. 8, one day earlier than nearly 250 select theaters nationwide.

Ronnie Snyder, manager and head projectionist at Cinema City 9, said telephone calls inquiring about tickets and show times for “Big Stone Gap” are becoming more frequent the closer it is getting to opening night.

In the fall of 2013, movie extras came from various towns in coal country to be a part of Trigiani’s creation. The New York Times bestselling author, who grew up in Big Stone Gap, has said that people from this region will feel connected to her movie.

The film is set in 1978 and centers around Ave Maria Mulligan, a 35-yearold pharmacist, whose life changes when she learns of a family secret and tries to figure out who she really is. The self-proclaimed spinster, played by Judd, is also co-captain of the Rescue Squad and director of The Trail of the Lonesome Pine Outdoor Drama.

Trigiani, Judd, Wilson and Elfman are scheduled to attend some of Saturday’s events.

A parade on Wood Ave. set for 11 a.m. will include the 2015 cast of The Trail of the Lonesome Pine Outdoor Drama and movie extras in 1978-era costumes.

At noon, Trigiani is scheduled to present a special award to her mother Ida at The Fall Show of the Garden Club at the Southwest Virginia Museum.

A red carpet will be rolled out on Wood Ave. at 7 p.m. and Trigiani will introduce the cast of “Big Stone Gap”. A street dance will follow with music from 1978.

The original Mutual Pharmacy will be open during the day for food services and displays.

Bathrooms and comfort stations will be located in the central business district.