New music is on the way from late Waylon Jennings 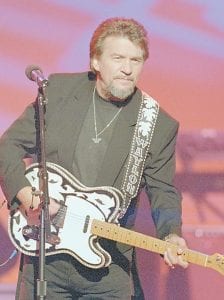 The family of the late Waylon Jennings, pictured above, will soon release songs the country music icon recorded shortly before his death 10 years ago. (AP Photo)

The family of Waylon Jennings will soon release songs the country music icon recorded shortly before his death 10 years ago.

At least eight of the 12 songs on the tentatively titled “Goin’ Down Rockin’: The Final Recordings” were written by Jennings and eight have not been released in any version before. The simple vocal and guitar tracks were cut at steel guitarist Robby Turner’s studio before Jennings’ death in 2002 and musicians who worked with Jennings have gathered to finish the tracks.

The release later this year is part of a new effort by Jennings’ family to establish a Waylon business brand similar to the booming estates of artists such as Johnny Cash, Elvis Presley and Hank Williams.

His son, Shooter Jennings, also plans to launch a clothing line, a redesigned community-based website and finalize plans for a biopic. All that also coincides with the second installment of the three-part tribute “Waylon: The Music Inside,” released last week and featuring songs from Hank Williams Jr., Dierks Bentley and Jewel.

“Feb. 13 is 10 years since he died and I do feel like it’s time for him to have a presence,” Shooter Jennings said. “It should have been before, but I don’t think anybody was ready to take it on. I certainly wasn’t. I know this year we’re about to bring him back, you know what I mean?”

Jennings died from complications of diabetes at 64.

He left behind one of country music’s most important legacies. He fiercely fought for his artistic freedom, creating the so-called “outlaw” movement — a term he chafed under — that would eventually envelop artists like Willie Nelson, Johnny Cash and Kris Kristofferson. The four toured together as “The Highwaymen.”

Just as importantly for modern country music, however, he was a voracious listener who wasn’t afraid to incorporate folk or rock or pop into his voluminous repertoire. He had many different sides and many different kinds of artists claim him as an inspiration.

His unwillingness to bend to the will of record labels in Nashville was country music’s highestpaying gamble. He held out for a better contract, then turned around and released “Wanted: The Outlaws,” the first platinumselling country album. Albums like “Honky Tonk Heroes” and “Lonesome, On’ry and Mean” helped redefine country music, moving it from regional art form to pop culture phenomenon.

It was never easy, though.

New music will surely spur a little buzz for one of the most namechecked artists by modern country musicians. After making his guide recordings, Jennings discussed how to flesh out the songs on “The Final Recordings” with Turner before his death. Turner called in Jennings friends like guitarist Reggie Young and songwriter Tony Joe White to finish off the tracks.

The album will include White’s “Goin’ Down Rockin’” and Willie Nelson’s “Sad Songs & Waltzes” and is described by Turner as similar in spirit to the work Cash did with Rick Rubin during the American Recordings sessions at the end of his life. It will join “Waylon Forever,” an album cut with Shooter Jennings when he was 16 and reworked and released in 2008, as Jennings’ only posthumously released music.

Shooter Jennings hasn’t heard all the songs, but says those Turner played for him in the past have included interesting interpretations.

Shooter Jennings also says he’s been working with T-shirt designer Blood is the New Black on a Waylon clothing line that will go beyond the basic black merch tee.

“There will be Waylon shirts next to the Cash shirts at Hot Topic, and our shirts will be cooler,” he joked. A high-end line of clothes is in the works, too.

Jennings wasn’t ready to give too many details about a possible biopic, but said he believes he’s found a producer who is in tune with what the family wants and hopes to have a script by the end of the year. Colter said the topic of biopics came up over the years and Jennings, who broke into music as Buddy Holly’s bassist, didn’t want the usual Hollywood treatment.

“The way it will happen with him won’t be like any of the others,” Colter said. “He didn’t like those. In fact, when he saw ‘The Buddy Holly Story,’ he just cringed because they didn’t begin to get his character.”

Keeping things authentic is the key to success in these types of ventures, says Cash’s son, John Carter Cash, who helps oversee his father’s thriving estate.

Cash’s image, story and music still produce millions of dollars a year for his heirs. But John Carter Cash says he must remain vigilant in business dealings so that he honors what would have been his father’s wishes. For instance, Cash’s likeness wasn’t used for alcohol and tobacco while he was alive and that hasn’t changed after his death. But authenticity isn’t the only driver for Cash’s posthumous success.

“It’s also that mystery that is so appealing to people,” Cash said. “Music is timeless. I believe also in the Waylon, as you say, brand — I don’t know if that is the right word. It’s his character and his spirit carrying on. No matter what we do as a family in the decisionmaking, that was all set forth by the person — Waylon, my dad, whoever they may be. And No. 1 to me is to be respectful. Not to exploit. That’s most important. I’d rather not get the deal — and I’ve turned many down — because I felt like it exploited him.”