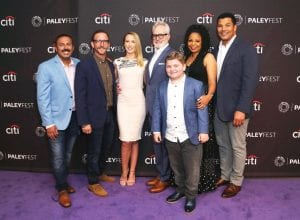 Want to take a trip Thursday night to the Cumberlands? Turn your TV to NBC.

A new primetime show that debuted last month is set in rural Kentucky and is worth a watch if you’re into a network comedy that kind of feels like a combination of “Glee” and “Community.”

The plot of the pilot centered on a high-strung, down-on-hisluck former Princeton music professor who returns to his late wife’s hometown in the Kentucky countryside, where he meets a choir from a local church that has, to be polite, some room for improvement.

He intends to leave town as soon as possible, but after meeting the owner of a cemetery who would not bury his wife and who also leads a choir that always wins the town’s annual competition, the professor decides to stick around and coach up the choir he met with a combination of choral knowledge, amicable encouragement and a healthy dose of sarcasm.

The show includes some stereotypical Kentucky tropes, with the actors putting on their best Southern accents, and the Princeton professor doesn’t appear entirely enthusiastic about being in the Bluegrass State to start the episode. But the pilot didn’t include any low blows, and toward the end (this will be our only spoiler here) he begins to embrace the community.

The show’s writer, Lesley Wake Webster, said during press tours that the inspiration for the show came from her grandfather, a former choir director who lived in rural Kentucky.

The professor is played by Bradley Whitford – you may know him as Josh Lyman from “The West Wing,” or those of you with more sophisticated taste will recognize him as the bad guy Eric from the Adam Sandler comedy “Billy Madison.”

She wasn’t in the first episode, but according to the Lexington Herald-Leader, actress Laura Bell Bundy, who grew up in Lexington, will have a recurring role later in the season.