By KENDAL WEAVER
The Associated Press 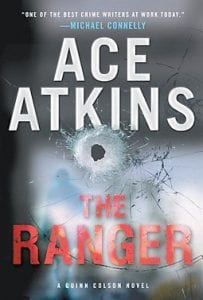 The book cover of “The Ranger” by Ace Atkins is shown in photo above. (AP Photo/G.P. Putnam’s Sons)

“The Ranger,” (G.P. Putnam’s Sons), by Ace Atkins: A fast-paced thriller set in a backwoods Mississippi hamlet beset with violence and corruption, “The Ranger” is the enticing first novel in a new series by Southern author Ace Atkins.

It features Quinn Colson as an Army Ranger back from Afghanistan and heading home on leave to sort out a favorite uncle’s curious death, Colson’s own fractured family and the lost love of his youth.

He finds much more: a pregnant teenage girl on a road, a scheming developer plundering pristine land and a hair-raising, diabolical leader of a scummy, ragtag cult living in squalid trailers. The rugged Colson will get little rest.

The novel arrives on the heels of the announcement that Atkins was selected by publisher G.P. Putnam’s Sons to write the next book in the highly successful Spenser series of Robert B. Parker, the acclaimed Massachusetts crime writer who died last year.

Atkins, an Alabama native who now lives on a farm in Mississippi, first gained notice a decade ago with his Nick Travers series, which was set in the South and was hooked on the region’s music. With Spenser, a tough Boston private detective with a taste for good food and drink, Atkins will be working new terrain.

But “The Ranger” echoes the Spenser books in at least one way: When matters turn violent, Colson relies on a friend, Boom, much as Spenser needs the aid of Hawk — both Boom and Hawk are fearsome black men who don’t back off a fight.

Atkins also has some fun, dropping an allusion or two to Mississippi literary giant William Faulkner. In the opening chapter, the pregnant girl who Colson finds walking down a road is an updated version of the one who is doing the same thing at the start of Faulkner’s novel “Light in August.” Both are named Lena, they have been walking roads from Alabama to Mississippi looking for their baby’s father, and they use the same country dialect in noting they have walked “a fur piece.”

But this is crime-genre writing. There may be one too many plot twists or rounds of mayhem for some, but with “The Ranger,” Atkins has made Colson’s harrowing trip home a memorable debut for a new series.