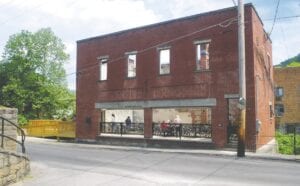 OPEN TO THE PUBLIC. AND THE SKY – Members of the community milled around in Bolling’s North Fork Veranda at 1715 River Road in Whitesburg on Tuesday as they prepared for the opening of the public dining area. The facility is in the old Salyer’s Radio Building.

Letcher County got a new outdoor dining area and a retired county official and community volunteer got a surprise at the same time — the open-area facility was dedicated to him.

The Letcher County Convention and Tourism Commission cut the ribbon on Bolling’s North Fork Veranda at 1715 River Road in Whitesburg on Tuesday. The building is owned by Mary Bolling but is open to the public and is operated by the tourism commission.

Tourism Chairwoman Missy Matthews said Mary Bolling had one condition for letting the commission use the building for free. She wanted to dedicate it to her husband, Matthews said, fighting back emotion.

During her dedication speech, Matthews noted Harold Dean Bolling’s 29-year service as county attorney, his work to create a mandatory garbage collection system, help the city of Blackey build a water system, help the city of Fleming-Neon build a water and sewer system, start a child support collection office out of his own pocket, and create a domestic violence counseling program that is now mandatory for people convicted of assaulting a family member. Now in semi-retirement from his law practice, he is also secretary/treasurer of the Letcher County Food Pantry.

“Mary said on multiple occasions when she was in the school system, she told Harold about kids who needed clothes, and Harold said take the credit card and buy what they need,” Matthews said.

Harold Bolling credited his wife, the city, and the tourism commission with everything that was done to develop the North Fork Veranda.

“I didn’t come here to be honored today,” Bolling said when called to the podium by Matthews. “I came here to honor my wife for having the vision I didn’t have.”

Always quick with humor, he didn’t remain serious for long, launching into a long, self-depreciating story of how Mary Bolling came to buy the old Salyer’s Radio Building after the roof and floors collapsed and the city of Whitesburg sold it. As he tells it, she wanted the building badly, but he wasn’t interested – so not interested he didn’t remember to drop her bid off at City Hall.

“I forgot,” he pleaded, but he said she wasn’t buying it — the excuse, that is. She did buy the building when the city decided to negotiate the sale rather than accept the bids, which were too low.

Bolling said he normally puts property in both their names so if one passes away, the other has rights of survivorship. When he asked her if she wanted this deed the same way, he said, her answer was an emphatic no.

“Put it in my name. That’s my building,” he chuckled.

Mary Bolling had several ideas for the building, but they didn’t move ahead with them. She even had an idea to turn it into some kind of public space. Then Matthews approached Harold, and he told her they had already had an offer to buy it.

“She said, ‘I don’t want to buy it, I want you to let me use it for nothing,’” he said. That’s when he passed Matthews off to his wife, who agreed immediately.

“I am so glad she had that vision,” Bolling said.

The tourism commission used downtown revitalization grant money and local contributions to clear out the debris and floor the shell of the old building, build a deck, place custom railing and electric lights in the building and open it up to the public so people still not comfortable with eating inside after the pandemic can pick up food from a restaurant or bring their own and eat in the open air.

Harold Bol l ing said he worked in downtown Whitesburg for 40 years and loves it, but business has waned over the years.

“In the last few years, especially since the tourism commission started working with it, I started to hear people talk, and it was people outside the county,” he said.

They called Whitesburg “quaint” and were impressed by the new life in downtown. Bolling said that and the work on the Veranda — which involved the county tourism commission, the city of Whitesburg, CANE Kitchen, Appalshop, Homes Inc., and Double Kwik ­— shows a sense of community that’s growing here.

“Let’s do away with divisiveness,” Bolling said. “Let’s work together and do good things for our community.”

Matthews said the building is open to anyone, and if someone wants to have a special event there they can contact the tourism commission through discoverletcher.com.

The project was paid for through the Southeast Kentucky Downtown Stimulus Fund’s Healthy Downtowns Initiative, which is a partnership between the Appalachian Impact Fund, Community Economic Development In Kentucky (CEDIK), the Foundation for Appalachian Kentucky and Invest 606.