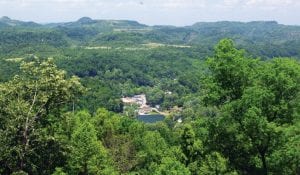 NEW VIEW – At left, the city of Jenkins and Elkhorn Lake peak out from between the trees in this picture taken from the new overlook on US 23 near Pound Gap. (Photo by Sam Adams)

Visitors from around the country have already visited the new overlook on the northbound lane of US 23 near Pound Gap, Jenkins Mayor Todd Depriest said, and if they stop to visit the city, visitors will find a new dock on Elkhorn Lake along with new picnic tables.

At the May meeting of the Jenkins City Council, Depriest praised the Letcher County Tourism Commission for building the overlook platform at the first pull off area on US 23 after crossing into Kentucky from Virginia. The overlook is located just past the Civil War monument, at a highway pull-off that was originally intended to be the location of a visitors center. Trees and brush that would have blocked the view have been cleared and Depreist said Kentucky Power is considering planting wildflowers in the grassy area around the platform. He added that he hopes to have a sign put up that gives a short history of Jenkins and describes the view and tourism opportunities in the area.

Depriest thanked the Letcher County Conservation District and LCC Vocational students for the dock and said when it is finally in place and anchored, he will make sure to make a formal declaration of appreciation. He also praised Emmanuel Baptist Pastor Gary Robbins and Jenkins resident Jerry Puckett for their efforts to clear the lily pads from the lake. Depriest thanked the volunteers who take care of the flower pots on Main Street and the businesses that adopt the pots near their storefronts. Council member Ernestine Hill also praised city workers for their efforts.

Depriest told the council the budget will be tight, and said that the federal Rural Community Assistance Program will do a rate study for the city’s water and sewer rates, as well as sanitation rates. He added that they are looking for other ways to reduce the amount of solid waste going to the landfill, including methods of converting solid waste into methane gas.

City Attorney Randall Tackett conducted the second budget reading and announced that a summary of the budget will be available for public inspection at City Hall during business hours. Tackett also read a resolution praising Jenkins High School student Paul Breeding for being accepted at the Morehead State University Craft Academy. The academy is part of the STEM (Science, Technology, Engineering, and Mathematics) program to enhance education in those disciplines. Breeding is the son of Kevin and Valerie Breeding of Thornton.

In response to a question from Councilman Rick Damron about a line item in the city’s budget for the sidewalk project, Depriest explained that the line item is in reference to a bank account created to store matching funds for the project. He said he has been informed that the entire cost of extending the sidewalk will be reimbursed.