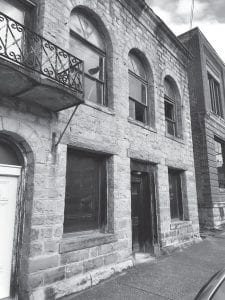 A new law office will be located on the first floor of the W.E. Cook Building on West Main Street in Whitesburg, and up-scale apartments will take up the second floor, say the building’s new owners.

Apartments to be built in the old W.E. Cook building on West Main Street in Whitesburg will be “up-scale, condominium style” apartments, the new owner of the building said.

Josh Howard, an attorney in Pineville, said he has done similar projects in Pineville and in Harlan, and decided that Whitesburg would be a good place for another one.

The apartments will be on the second floor of the 106-year-old stone building.

The first floor will house a law office for the firm owned by Howard and his wife, Whitney Howard, who has strong family ties to Letcher County. She is a daughter of Chris and Cynthia Gooch of Hazard and a granddaughter of Ernestine Gooch of Millstone and the late Kenneth Gooch. Both of the Howards are attorneys.

Josh Howard said he intends to completely gut the Cook building, which has set empty for decades, clean it up, and start over from scratch. Everything inside, including plumbing, electric and flooring will be new. He said the exterior will be cleaned and restored, including the distinctive wrought-iron balcony over the front doors of the duplex building. Howard said he has purchased only one side of the building, but is negotiating to buy the other side. It is owned by the brother of the purchased side’s previous owner.

Howard said he will decorate the inside of the building with historic photos of Whitesburg.

“It’s a historic building, and we want to pay homage to it by using old pictures instead of new ones,” Howard said.