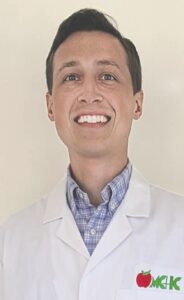 Letcher County’s newest pediatrician said he views his job as primarily the prevention of childhood disease, including illnesses such as a chickenpox, measles, COVID-19 and obesity.

Fresh off a residency at the University of Kentucky Children’s Hospital, Cornett said moving home to the mountains was not a difficult decision.

“It was easy. My wife and I, we always intended on coming home,” he said. “We lived in Lexington the last three years, and we enjoyed the convenience of the city, but it was an easy choice to move back.”

Cornett is married to Sierra Dixon Cornett of Linefork, also an LCCHS graduate. Cornett is the son of Kenneth and Ginger Cornett of Blackey. Kenneth is an administrator in the Letcher County Public Schools; Ginger is a teacher in the county schools.

Cornett said his experience at the University of Kentucky has led him to believe his most important job is convincing parents who are hesitant to have their children immunized that vaccines are safe and effective. As a resident at the children’s hospital, Cornett said he saw several children with diseases that are “entirely preventable.”

“You’re able to change a whole lot more lives by giving vaccines to stop these preventable illnesses than you are just by treating them,” he said.

He pointed out that the HIB vaccine has been available for less than 30 years, but has already had a huge impact on the lives of children.

“I saw Haemophilus Influenzae and meningitis only one time because of the vaccine,” he said.

At 29 years old, Cornett said he has never seen a case of measles, rubella, mumps, or polio, all of which were virtually eliminated with vaccines in the mid-twentieth century. Polio is still seen in only two countries in the world, he said, but there are still people locally who exhibit the effects of the disease, which are usually such disabilities as paralysis or weakness of the lower limbs.

“We rarely see chickenpox anymore because of the varicella vaccine,” he said, which was approved in the 1990s.

Cornett said he did treat some cases of chickenpox and childhood shingles in Lexington, because the children had not been immunized. Like chickenpox, he said, COVID-19 could be controlled with a vaccine.

Cornett said he also sees childhood obesity as an epidemic here that needs to be addressed.

“Things we used to think of as adult diseases are becoming more common in children,” he said, and many of those have been linked to obesity. “It’s not anything about appearance, it’s just about health.”

He said he also plans to provide “a safe medical home” for children, and will be an advocate for child health.

Asked about injuries to kids caused by all-terrain vehicle usage,” Cornett said he urges parents and children to consider the safety of the vehicles before riding them, especially on the highway.

“I’m also from the country and I grew up around ATVs. I can’t say I’ve never been on an ATV without a helmet because that would be a lie, but those things aren’t a car,” he said.

He said children should be encouraged to ride safely, and should wear helmets when riding.

Raised at Blackey, Cornett attended Alice Lloyd College in Knott County for four years, spent another four years earning his medical degree from the University of Pikeville College of Osteopathic Medicine, and then spent three years in residency at U.K.