INTERPRETIVE SIGN sits in front of Jenkins Library, near the location of the old Dunham High School.

The imposing brick edifice that is the old Jenkins High School is familiar to most people who have driven along the town’s Main Street toward Burdine.

It was renovated a few years ago and stands as a testament to efforts of Consolidation Coal to build a “model city” in the mountains.

Not so familiar is the wood frame and cinder block school that sat nearly hidden on the opposite side of the street, up the hill behind St. George Catholic Church. That school was the only one African-American students were allowed to attend until 1964 when the state forced the Jenkins Independent Schools and the Letcher County Schools to integrate, 10 years after the Supreme Court ruled in the landmark Brown v. Board of Education case that “separate but equal” schools were unconstitutional.

“They were separate, but we all knew they weren’t equal,” said Carolyn Hollyfield Rodgers, who attended that separate “colored school” through eighth grade. She was a freshman in the first integrated class at Jenkins High School, and now she wants people to remember that history. 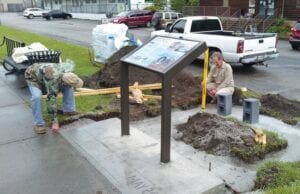 INSTALLING SIGN – Kedrick Sanders (left) and Mack Fultz work on the flower bed that will back an interpretive sign remembering the old Dunham High School, the former segregated black school in Jenkins. (Photo by Sam Adams)

The retired teacher, who lives in Houston, Texas, has raised money to put a state historic marker for the Dunham High School, as the school for Black children was named, and an interpretive panel telling the story of segregation and integration in the mountains.

It is being installed this week in front of the Jenkins Library. She had been working with Mayor Todd Depriest and Jenkins School Board member Eileen Sanders on the marker, and Sanders was able to find historical school records that she used to write the text for the historic marker and the interpretive panel. Rodgers said she had originally wanted the plaque at the location of the old school, but it was out of sight there. The city council decided it needed to be somewhere that the public could see it.

“Todd and the city council moved us from the back of the bus to the front of the bus, and put us right on Main Street,” she said. The plaque includes information and photos related to the school, its Blue Devils basketball team, and segregation.

Rodgers grew up in Dunham, one of eight children of Collins and Effie Hollyfield, who moved to Dunham from Alabama in 1938, 12 years before Rodgers was born. Her father was a coal miner who lost sight in one eye at work, and became known around Letcher County as Jolly Joe the Popcorn Man for the popcorn truck he set up at special events all over the county. He was also the custodian at the school. Her mother wanted to be an English teacher but she was 17 by the time she completed seventh grade because of classes missed to pick cotton in Alabama.

Seventh grade was a common end to schooling for many African-Americans of that generation. In many southern states, high school was a luxury that Blacks had to pay for themselves at boarding schools in other places because they were banned from public high schools that only allowed whites to enroll.

The Dunham Graded School was the same. Black students attended that school and that school only, and classes stopped after seventh grade. When state law required that school districts provide education for Black children through 12th grade, Jenki n s renamed the Jenkins Grade School as Jenkins Colored High School and began enrolling students in 1931. Letcher County contracted with Jenkins to take its Black students at that school.

Rodgers went to the school while it was segregated, but she entered high school in the newly integrated Jenkins High School.

Rodgers went to college and became a schoolteacher, and said she has never been one to take up a cause, preferring to stay out of the spotlight. She stumbled onto this project in 2017 when she visited Jenkins with her son and his grandchildren on the way to a Kentucky State University reunion.

“It sounds real hokey for me to say this, but I got emotional standing on that property. I’m not the girl to do this,” she said.

She said by the time she was born, the camp houses in Jenkins had been sold by Consolidation Coal, and the neighborhood had integrated itself. She said she never noticed racism, and described her white neighbors as “awesome.”

But as she learned more and more about the history of the school district, she became more adamant that she wanted to do something to make sure people realize racism here was as real as it was anywhere else.

After the district was forced to integrate in 1964, it stopped taking Black students from the Letcher County District, moved Black students into the other buildings and turned the old Black school into a junior high school. It burned in 1969.

Rodgers said Sanders has been “a gold mine” of information about the state’s efforts to force Jenkins Schools to integrate, but so far she has been unable to get similar information from Letcher County Schools, which was one of 23 school districts in Kentucky that still had no plan to integrate 10 years after Brown v. Board of Education.

“To think I was living in the midst of people that were so spiteful that for 10 years they would defy the government,” she said.

Rodgers was graduated from Jenkins High School and attended Kentucky State University, one of two historically Black colleges or universities in Kentucky. She met her husband, the late Willie Rodgers, there, and the two moved to Houston when he was drafted by the Houston Oilers NFL team 1972.