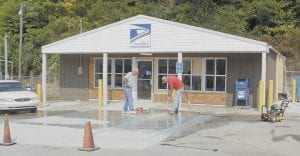 GETTING READY FOR MORE CUSTOMERS – Uda Pharis (pictured at left) and Matt Campbell, both of Litchfield, Kentucky, power washed paint off of the sidewalk in front of the new Mayking/Millstone/Thornton Post Office on August 20. (Photo by Sally Barto)

Although Mayking, Millstone and Thornton residents have different ZIP Codes, they will soon be receiving their mail at the same location.

Whitesburg Postmaster Tim Reynolds said the new post office located next to Sears in the Mayking Mall may be ready in two weeks to serve customers from Mayking and Thornton. Customers from Millstone have been using the facility since February 6.

“The office will be known as the Mayking/Millstone/Thornton Post Office. Each office will have a separate section of P.O. boxes,” said Reynolds.

Mayking will have 232 boxes and Thornton will have 107 boxes. The Millstone portion already has 131 boxes.

The Thornton Post Office was “emergency suspended” one year ago this week and was relocated to the Mayking Post Office August 25, 2006 because of what Reynolds termed structural problems with the facility. Some Thornton customers were unhappy with the move because they feared losing the identity of their community.

Many customers have not been satisfied with the Mayking office because it is located in a small building with a parking area in front that is barely big enough for three passenger cars. Vehicles leaving the Mayking office must back into heavy traffic using KY Highway 1862.

The Millstone Post Office was closed on February 5, said Reynolds, because the modular building housing it needed to be moved to make room for the Kentucky Department of Transportation to widen a one-lane bridge located nearby.

Reynolds said the new location will have a 24-hour lobby which will enable customers to receive their mail at the office 24 hours a day, seven days a week. Reynolds said the lobby will be open on Christmas and New Year’s Day.

Reynolds said Highway Contract Route customers will not experience any change in addressing.

Reynolds said customers can continue to expect courteous and efficient service from the postmaster at the new location.