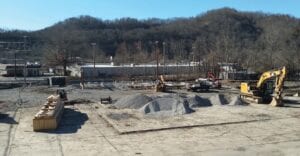 Construction work continued this week at the former Lowe’s site in West Whitesburg that will be the new home of the Dairy Queen restaurant now located beside the Letcher County Recreation Center.

Letcher County lost a restaurant, but it will gain one next week, and another will be switching locations within the next three months.

Restaurant will be opening a second location, this one in downtown Whitesburg, next week.

Dairy Queen, which The Mountain Eagle reported in September would likely move its restaurant to West Whitesburg, is well along into construction of that new building. Sources say the restaurant is planning to open by early May.

Javier Navarro, then a 27-yearold former waiter, opened the first Paco’s in February 2020 on Lakeside Drive in Jenkins. The new Paco’s in Whitesburg is much larger and will offer a slightly different menu, featuring more traditional Mexican foods rather than the Tex-Mex fare served at Jenkins and at most Mexican restaurants in the area. Menus on the windows of the new restaurant feature dishes that will be unfamiliar to many because they aren’t available at other restaurants in the area. Navarro has tried out many of the recipes at his Jenkins restaurant, but has not added them to the menu there. 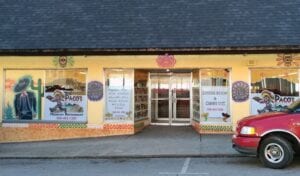 Whitesburg Fire Chief Perry Fowler, who also serves as the city building inspector, said the restaurant can open when the state inspector issues a certificate of occupancy. That inspection is scheduled to take place early next week.

Workers have already poured concrete footers, stubbed out plumbing and erected some of the steel for the new Dairy Queen, which will be located on the site that was formerly home to Lowe’s Home Improvement and Harlow Motor Company before that. The site has been vacant since Lowe’s closed in early the 1990s and the building was torn down.

Work slowed last week during the winter weather, but resumed this week. The building is expected to be ready by May, employees said.

Dairy Queen’s current restaurant on Jenkins Road was built for Burger Queen in the 1970s and became Druther’s in 1981 when the company changed its name. Druther’s became a Dairy Queen territory operator in 1990 and changed the Whitesburg restaurant’s name to Dairy Queen soon after. It is now owned by Fourteen Foods of Eden Prairie, Minn., the largest Dairy Queen franchisee in the country.

It owns many other locations across central, northern and western Kentucky.

Rumors of a Huddle House locating in Whitesburg are so far just that – rumors. There has so far been no indication that the diner-style franchise is planning to expand here. Fowler, whom builders must contact to get the building requirements and permits for the city, said no one from Huddle House has contacted him.