New road should be finished by second week of December 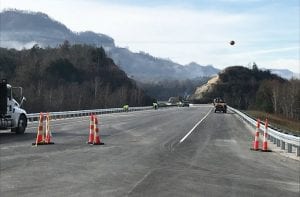 ROADWORK ON SCHEDULE — Workers have been busy laying blacktop, installing guardrails, and painting lines as a new section of U.S. 119 nears completion in the Cumberland River area of Letcher County.

The valley section of new U.S. 119 at Eolia is on schedule and is expected to open to traffic in the next three weeks, according to the Kentucky Department of Highways.

Paving began last month on the road, which replaces the highway www.themountaineagle.com www.itscreams.com originally built in the late 1920s. The new section will take cars from the previously reconstructed road at Partridge to the old road near Oven Fork Mercantile.

Sara George, spokeswoman for the Kentucky Department of Transportation District 12 in Pikeville, said the contract calls for the paving, striping, guardrails and signage to be done by around the first of December, but doesn’t set a specific date. She said the work should be complete in the first two weeks of the month.

Once that section opens, there will be two short sections totaling around two miles left to reconstruct.

The first section will lead from the end of the road being paved now to the first three-lane section of U.S. 119 on Pine Mountain, just north of KY 932. The second will be from near Pine Mountain Junction south to the retaining wall.

In 2000, after a school bus driver was killed in a collision with a tractor-trailer on the mountain, residents demanded the road be improved. State officials promised a tunnel, but in the meantime engineers designed spot improvements to the existing road, widening part of it to three lanes, widening curves, and re-cutting cliffs to reduce the danger of rockslides. The radius of the curves wasn’t changed, only the width of the road. Many of the accidents on the mountain stemmed from long tractor-trailers being unable to negotiate the curves without taking both sides of the highway.

Between 1995 and 2000, the 7.7- mile mountain road saw an average of 23.5 crashes a year, with an average of 14.5 involving tractortrailers. The state banned trucks from the road in 2001, and the accident rate dropped by 48 percent. Two years after spot improvements were made and the new road reopened to truck traffic in 2005, collisions averaged 12 a year with an average of one crash a year involving large trucks.

The collision rate had dropped so much after completion of the improvements, the highway department no longer considered it to be dangerous.

U.S. 119 is listed by the Appalachian Regional Commission as part of Corridor F of the Appalachian Development Highway, so to avoid using ARC money that would be needed on the tunnel, the state of Kentucky paid for the spot improvements out of its own transportation money, and transferred the tunnel project to the ARC. The ARC lists relocation of the road between Whitesburg and Oven Fork as being in “location study” with an estimated cost to complete the project at $441.2 million.

While the ARC has the road in its plan, President Donald Trump’s budget plan sent to Congress in May calls for the elimination of the Appalachian Regional Commission next year.

As of September 2016, 65.5 of the 78 miles of Corridor F eligible for ARC money had been completed, with 4.5 miles of the valley floor road under construction. The section from Oven Fork to Whitesburg was the only section remaining.

The ARC estimates it will cost approximately $16 billion to complete the highway system in the 13 ARC states.