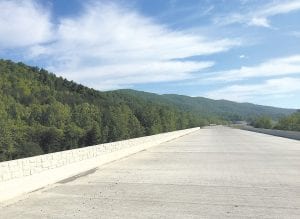 This bridge over the Poor Fork of the Cumberland River connects two unpaved, but short stretches of new highway.

The road to completion of U.S. 119 South from Partridge to Eolia has been a long one, but officials believe the end is in sight.

The Department of Highways in Pikeville is opening bids for finish asphalt June 28, and if bids are accepted, work is expected to be complete within two months.

That leaves two sections of highway to eliminate all of the narrow two-lane road between Whitesburg and Cumberland that was originally built in the 1920s. It does not address a tunnel between Eolia and Whitesburg, which residents were promised around the turn of the 21st century, but is not in the State Highway Road Plan.

The department has accepted bids for the asphalt work on the valley floor twice before. Two sections of the road of the road are not ready for finish asphalt, but Sara George, spokesperson for District 12 Highway Office in Pikeville, said work is proceeding and should be done soon.

“We have put the final paving out for bid twice and both times all bids were rejected because they came in too far above the engineer’s estimate for how much the work should cost. It is scheduled to go out for bids again this month,” George said. “If we get a good low bid from this month’s letting, Steve Green, our Whitesburg Section Engineer, estimates that we should be able to open the road from the Harlan County line to Oven Fork Mercantile sometime in September, early October at the latest.”

People who have driven on the nearly complete, but closed, road say it saves about 10 minutes on a trip from Whitesburg to Cumberland, which otherwise takes about a half-hour. Only about two-thirds of the road has any asphalt at all.

The last section of the road south of the mountain, called Section 5 in the State Highway Plan, will connect the road from Oven Fork Mercantile to the first three lane section of the Pine Mountain Road, just north of KY 932.

Design work for that section isn’t completed, so it will likely be years before it is built. There is one other section of the original road on the north side of Pine Mountain just outside of Whitesburg. That section, and the entire Scenic Byway between Whitesburg and Eolia, would be bypassed if a tunnel were built.

In 2000, after a school bus driver was killed in a collision with a tractor trailer on the mountain, residents demanded the road be improved. State officials promised a tunnel, but in the meantime engineers designed spot improvements to the existing road, widening part of it to three lanes, widening curves, and re-cutting cliffs to reduce the danger of rock slides.

Between 1995 and 2000, the 7.7- mile mountain road saw an average of 23.5 crashes a year, with an average of 14.5 involving tractor trailers. The state banned trucks from the road in 2001, and the accident rate dropped by 48 percent. Two years after spot improvements were made and the new road reopened to truck traffic in 2005, collisions averaged 12 a year with an average of one crash a year involving large trucks.

“ The crash rate had dropped so much since those spot improvements it was no longer considered unsafe,” George said.

US 119 is listed by the Appalachian Regional Commission as part of Corridor F of the Appalachian Development Highway, so to avoid using ARC money that would be needed on the tunnel, the state of Kentucky paid for the spot improvements out of its own transportation money, and transferred the tunnel project to the ARC. The ARC lists relocation of the road between Whitesburg and Oven Fork as being in “location study” with an estimated cost to complete the project at $441.2 million.

While the ARC has the road in its plan, President Donald Trump’s budget plan sent to Congress last month calls for the elimination of the Appalachian Regional Commission next year.

As of September 2016, 65.5 of the 78 miles of Corridor F eligible for ARC money had been completed, with 4.5 miles of the valley floor road under construction. The section from Ovenfork to Whitesburg was the only section remaining.

The ARC estimates it will cost approximately $16 billion to complete all of the Appalachian Development Highway System in the 13 ARC states.