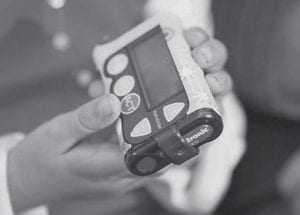 Above, 7even-year-old Ellie Clark holds her insulin pump, which also works with an implant to display blood sugar levels. At right, Eillie is held by her mother, Katie Clark, on the deck of their home in Grandville, Mich. Both mother and daughter have an implant in their side to help monitor blood sugar level.(AP Photos)

Diabetes care is undergoing a transformation: Thousands of U.S. patients are switching from a few finger-pricks a day to track their disease to new sensors that keep guard around the clock.

The last six months brought boosts to the technology, as U.S. government health officials approved children’s use of a sensor that works for three days in a row – and cleared the longest-lasting version yet, a seven-day model, for adults.

The ultimate goal is to create an “artificial pancreas,” pairing such sensors with implanted pumps that would automatically dispense insulin to make a diabetic’s blood sugar better resemble a healthy person’s.

That is still years away. For now, the hope is that these under the-skin sensors will empower the most vulnerable patients – those who require insulin injections – to make changes that better control their disease. Perhaps more important, they come with alarms that can sound in time to avoid dangerously high or low bloodsugar levels. 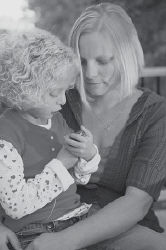 “It really catches problems before they’re problems,” says Katie Clark of Grandville, Mich. She bought a sensor for her 7-year-old daughter, and no longer has to wake up in the middle of the night to spotcheck whether Ellie’s OK.

But these “continuous glucose monitors” cost up to $1,000 , plus at least $350 a month for supplies. Health insurance coverage is hit-ormiss: Some do pay but many refuse pending proof that the sensors live up to their promise of better health.

Some short-term studies show users greatly improve control of their blood sugar, while other studies have found little impact.

Why the discrepancy? Diabetics who do the worst job fighting their disease aren’t going to put in extra effort to improve just because of a sensor, says Dr. Irl Hirsch of the University of Washington.

“We learned that lesson the hard way,” says Hirsch, who presented research at a recent diabetes meeting suggesting the sensors instead will most benefit patients who can’t lower their blood sugar to optimal levels – a score below 7 on a test called the A1C – despite following best-care guidelines.

Hirsch finds the sensors help lower A1Cs between 7 and 8.5, but not those who start out higher.

By November, scientists should complete enrollment of 450 diabetics into a study funded by the Juvenile Diabetes Research Foundation to address insurers’ questions on best use of the sensors. Preliminary results are due next year.

“People thought it would just be the silver bullet, if you got this in somebody’s hand they’re going to do better,” says Aaron Kowalski, a JDRF research director who has used the sensors himself since 2006. “That won’t just magically happen. … They need to utilize that information.”

Millions of people have diabetes, meaning their bodies cannot properly regulate blood sugar, or glucose. About 5 million inject insulin, a hormone that converts glucose into energy, to treat their diabetes – including the roughly 2 million with Type 1 diabetes who require those shots to live.

But few diabetics test that often, and even frequent testers cannot know if glucose soars or plummets between tests or during sleep.

With the new technology, diabetics use a needle to insert a sensor just under the skin of the side or abdomen every three or seven days. The sensors wirelessly beam glucose readings to a pager-like device every 5 minutes.

Available now are Medtronic Inc.’s three-day Real-Time monitor – sold by itself, for adults or children, or together with a manually adjustable insulin pump – and DexCom Inc.’s STS-7 sevenday monitor for adults. A fiveday competitor from Abbott Laboratories is in development.

Users require training. For example, it takes up to 15 minutes for a glucose change in blood to be reflected in the cell fluid that these sensors measure. Doctors warn to always double-check with a blood test when a sensor signals trouble.

On the Net: Diabetes and glucose sensor information: www.jdrf.org