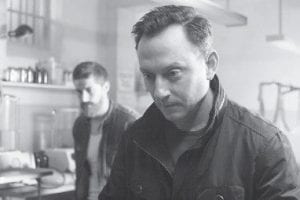 Matthew Fox, left, and Michael Emerson are shown in a scene from, “Lost,” premiering this week. (AP Photo/ABC)

Ever wonder how reality shows got that name?

What’s “realer”: The spectacle of a larger-than-life chef pitching fits for the camera on the Fox reality show “Hell’s Kitchen” (which returns for a new season Jan. 29)?

Or “Lost,” ABC’s eerie serial that teems with reality (all sorts of realities)?

Or maybe the returning “Friday Night Lights,” the much-acclaimed drama imbedded in a small Texas town where high school football reigns supreme? “Lights” occupies an everyday world the audience recognizes from experience, and it gives that real world back to them beautifully observed.

Of course, the reality genre continues to hold sway on TV. For example, you might have noticed that Fox’s “American Idol” is back. Airing Tuesdays and Wednesdays, “Idol” is real, real popular.

But in the next couple of weeks, viewers can enjoy four new scripted shows as well as more than a dozen returning favorites. Many are excellent and all above average. And any of them challenges the notion that real life is conveyed more vividly (and entertainingly) by camera hogs in the guise of playing themselves than by actors bringing scripted roles to life.

— Among the new series, “Lie to Me” is a by-the-book crime drama that reads between the lines. Tim Roth (“The Incredible Hulk”) plays a “deception expert” who investigates cases by “reading” the facial cues of suspects he interrogates — and then sussing out which of them are lying. Also starring Kelli Williams (“The Practice”), it premieres Jan. 21 at 9 p.m. on Fox.

— “Trust Me” pairs Eric McCormack (“Will & Grace”) and Tom Cavanagh (“Ed”) in a lighthearted drama set in an advertising agency. This is no “Mad Men.” It’s more like mad guys — a buddy comedy complicated when one of them is promoted as the boss of the other. Can their friendship survive their difference in status? Can their careers survive the jams they get into? Also starring Monica Potter, it premieres Jan. 26 at 10 p.m. on TNT.

— “Flashpoint,” CBS’ cop drama about an emergency tactical squad, which aired last summer and is now back on Fridays. So is USA’s “Monk” (starring Tony Shalhoub as the obsessive-compulsive detective who always cracks the case) and USA’s “Psych” (about a guy who pretends to be psychic and a pal who serves as his partner-in-crimesolving).

— “24,” whose new season is airing Mondays on Fox. It finds Jack Bauer (Kiefer Sutherland) scrambling through Washington to save the world from its latest bad day.

— “Friday Night Lights,” which returned Friday on NBC (fresh from DirecTV). As the third season began, Coach Taylor (Kyle Chandler) was bucking pressure from the team’s boosters for his coaching style, while his wife, Tami (Connie Britton), was taking heat from the community in her new job as high school principal.

— “Battlestar Galactica,” began its final season last Friday on Sci Fi with a heartbreaking discovery and at least one case of identity crisis.

— “Secret Diary of a Call Girl,” the saucy Showtime comedy with the self-explanatory title, began a second season Jan. 18. The London setting looks grand, Billie Piper looks yummy in her role as high-class escort Belle and the tales are a treat.

— “Big Love,” HBO’s drama about a middle-class husband and his three wives, returned Jan. 18. The king of his three suburban castles, Bill Henrickson continues to live a very full life, which includes a tyrannical father-in-law who is dead-set on destroying him. Meanwhile, he is getting serious about bringing a fourth wife into the family.

— “The L Word,” Showtime’s melodrama about a circle of lesbian friends and lovers, began its final run Jan. 18 by offing Jenny, one of its main characters. As the network announced last month, this would-be writer and well-established two-timer (played by Mia Kirshner) started the season dead in a swimming pool.

— “Lost” is back tonight (Jan. 21) at its inscrutable best with a two-hour season premiere. The Oceanic Six are taking steps to return to the island. Meanwhile, the island has disappeared into time. Huh? The overall ambiguity is summed up by a character who speculates, “We’re either in the past … or we’re in the future.” Sure.

— TNT’s “The Closer” returns Jan. 26 with Brenda Leigh Johnson facing marriage. But Brenda (the feisty, Southern-bred LAPD deputy police chief) isn’t terribly gung-ho about planning a wedding, nor is she game to be wearing white on the big day. Kyra Sedgwick resumes her award-winning portrayal.

Frazier Moore is a national television columnist for The Associated Press. He can be reached at fmoore@ap.org