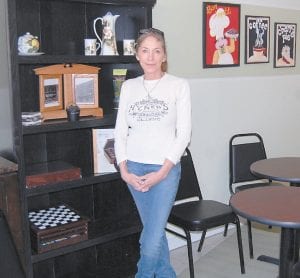 Tina Saylor was photographed recently in The Bakery and Coffee Shoppe in Cumberland, which she owns and operates. The shop is now serving biscuits and gravy to truckers and miners.

A bakery owner in Cumberland says her new shop will be a place where people can relax and enjoy a warm cookie and a fresh cup of coffee.

Tina Saylor has stocked a shelf in the seating area of the bakery with chess, checkers and backgammon games with the hopes that people won’t be in a hurry when they come to The Bakery and Coffee Shoppe located in the Freeman Shopping Center on East Main Street in Cumberland.

“ Life is so busy,” said Saylor, 52, a native of Evarts. “I want to encourage people to come in, sit and relax. It’s a nice spot that people can come and be comfortable.”

Saylor describes her shop as “the best of Starbucks and the best of Panera Bread combined with a Southern feel.”

On March 3, she began opening her store at 5:30 a.m. to serve biscuits and gravy.

“I’m going to open at 5:30 a.m. for all those coal miners that need to be at work early,” said Saylor. “We have a drive-thru window so they don’t have to get out of their cars.”

The shop will also serve specialty coffees. Homemade chicken, egg, ham and tuna salads will be available for purchase by the pound. There will also be a soup of the day.

Saylor said she will prepare a variety of bagels, donuts, cookies, pastries and cakes fresh each day. Some cakes and pies will be sold by the slice. She said a limited number of cookies will be available for sale at any time so she can continuously bake fresh batches throughout the day.

“There is nothing better than a fresh cookie out of the oven,” said Saylor.

Saylor has previously owned two other restaurants and helped open 13 others. In 1981, when she was just 21, Saylor owned Black Gold Saloon on the Perry/Knott County line, and in 1995 she owned Sam’s in Kingston, Tenn. Most recently, Saylor was a cook and waitress at Touch of Country restaurant.

Saylor estimates she has baked and decorated more than 200 cakes from her home, ranging from simple cakes to eight-tier cakes. She made wedding cakes for both of her sons.

“It is just something I have always loved to do,” she said.

Saylor said specialty cakes will be available at the bakery, but need to be preordered because of the time involved.

“You can use my designs or if you have your own design, I can do it,” she said.

Saylor said the bakery is designed so that customers will be able to see her working on her culinary creations.

“ You could stand here and literally watch me decorate a cake,” she said, standing behind the counter.

Saylor said that children will be invited to help her decorate cupcakes on the last Saturday of each month.

“The kids come in, get a cupcake and decorate it,” she said.