New show asks, who is most evil? 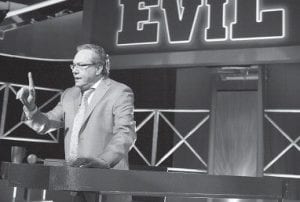 “Lewis Black’s Root of All Evil” is the new Comedy Central series is where you’ll find unlikely arguments for Paris Hilton being more evil than Dick Cheney. (AP Photo)

Evil is in the eye of the beholder. And that goes double for the pair of comic debaters squaring off during “Lewis Black’s Root of All Evil.”

The famously fiery Lewis Black is host, hearing testimony from two guest comedians as each makes his outrageous case. Then, gavel in hand, Judge Black hands down his decision, settling the question (at least until the next station break).

Is North Korean leader Kim Jong Il or MTV’s Tila Tequila more evil? This burning issue will be taken up in a future edition. Next week, “Root of All Evil” weighs the evilness of Donald Trump vs. Viagra.

Arguing that Oprah is the prevailing force of evil, comic Paul F. Tompkins declares that if she isn’t the leader of a cult, “I don’t what a cult is. And if I don’t know what a cult is, I should stop reading ‘Dianetics’ immediately.”

On the other side is Greg Giraldo, who says the church has “such a grip over the mindless masses that they’ll wait in line … for hours just to get a glimpse of a pork rind in the shape of the Virgin Mary.”

Some viewers may find “Root of All Evil” wickedly funny. Others may just find it wicked. Either way, it premieres Wednesday at 10:30 p.m.

Other shows to look out for:

– “Gilmore Girls” creator Amy Sherman-Palladino returns with “The Return of Jezebel James,” a comedy about a young career woman who has everything. Everything, that is, but a baby. And who then arranges with her at-loose-ends younger sister to carry the child she herself can’t conceive. Parker Posey stars as Sarah, the successful editor of young adult novels who, along with her good job, has a big Brooklyn loft and a handsome businessman boyfriend (Scott Cohen). She also has a yearning for a child, but learns she can’t get pregnant. Lauren Ambrose (“Six Feet Under”) plays Coco, Sarah’s sister, a drifter who can see the wisdom of accepting a steady gig as surrogate mom. She agrees to move in with Sarah, with whom she’ll finally have something in common. Well, there was one other thing: Jezebel James, Coco’s imaginary childhood friend, who inspired the best-selling book that Sarah published. Learning of her own role in that project, Coco feels proud. Now she’s got a chance to feel proud again. This unconventional comedy premieres on Fox with two back-to-back episodes Friday at 8 p.m.

– Alyssa Milano stars in the title role of “Wisegal,” a Lifetime movie inspired by the true story of a young widow who finds that her romantic entanglement with a member of the mafia puts her at mortal risk. Patty Montanari has resorted to supporting her two sons and herself by selling contraband cigarettes. Then she gets a business opportunity from Frank Russo (Jason Gedrick), a captain in a Brooklyn crime family. They begin a love affair. She ignores warning signs as she gets more and more involved. Mob boss Salvatore Palmeri (James Caan) persuades her to work as a courier transporting cash across the border from Canada. Then Patty discovers that Frank has murdered his own son. Can she and her children escape a similar fate? “Wisegal” airs on Lifetime at 9 p.m. Saturday.

Frazier Moore is a national television columnist for The Associated Press. He can be reached at fmoore@ap.org.