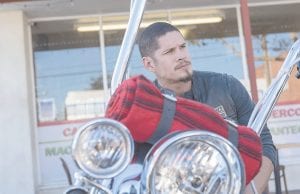 When “Sons of Anarchy” debuted in 2008, creator Kurt Sutter repeatedly heard the same comparison: it was the poor, white working class version of the HBO mob series, “The Sopranos.”

Now that “Sons of Anarchy” spin-off “Mayans M.C.” has launched, Sutter says he is prepared for it to inevitably be called the Latino rendition of the popular motorcycle gang drama. “But it’s more than that,” Sutter, the new series co-creator, told The Associated Press. “My hope is that as people get plugged into it … it becomes its own thing.”

Yes, “Mayans M.C.” focuses on similar motorcycle outlaw themes of crime, contradictions and divided devotions as its artistic predecessor. Yet, it aims to tackle the conflicted world along the U.S.-Mexico border amid poverty, a drug war and populations with blurred nationalities. It’s also filled with Mesoamerican imagery, issues of ethnicity and references to the poor conditions along the border.

The FX Networks series, which debuted on Sept. 4 and airs again at 12:30 a.m. Sept. 6 and 11:30 p.m. Sept. 7, is set in the fictional border city of Santo Padre, California, and follows Ezekiel “EZ” Reyes, played by J.D. Pardo, a fresh-out-of-prison “prospect” for a chapter of the Mayans, a Mexican- American motorcycle club. (A prospect is a potential member who must prove himself to the others). Reyes is coming to terms with his former life as a one-time promising student at Stanford

University who now is inside the world of crime and Mexican cartels.

Meanwhile, Ezekiel’s butcher father, played by Edward James Olmos, serves as his adviser and sometimes confidante as the young Reyes seeks just to survive. Together the pair leads a majority-Latino cast who navigate the dark world of motorcycle gangs and tensions from immigration, cartel violence and race.

Pardo, a California-born son of an Argentine father and a Salvadoran mother, said he knew little about “Sons of Anarchy” until he heard about “Mayans M.C.” So, one weekend, he binged watch the series and concluded he wanted the lead role in “Mayans M.C.,” though he’d have to educate himself.

“It’s the writing. It’s everything,” Pardo said. “I didn’t ride motorcycles. I didn’t know anything about bike culture. For me to be able to dive in that as an artist makes me feel like such a kid.”

But he wouldn’t have to educate himself about being Latino, Pardo said. That, he already knew from family.

Sutter said the idea for the project began years ago as FX sought to find productions similar to Sons of Anarchy but geared toward the growing Spanish-speaking market in Latin America. When “Mayans M.C.” began to become a reality, Sutter said he realized immediately it needed to be different.

“I also know that a white guy from Jersey shouldn’t be writing a show about people of color on his own,” Sutter said.

Sutter soon tapped Boston born filmmaker Elgin James to help give the show a distinct voice and a perspective from a writer of color. James, whose family background is Irish, African American and Dominican, is a former gang member who spent a year in prison for extortion and earned acclaim for his 2011 film, “Little Birds.”

James said he wanted to utilize his experience from the gang world to shape “Mayans M.C.” characters. Once an orphan and homeless, James said remembers how intoxicating it was be feared by flashing your gang name on hats or shirts.

“ But what doesn’t change is that you’re still that little, scared kid inside,” James said.

As a director, James said filming Pardo riding his motorcycle along the border fence and images of the La Virgen de Guadalupe with bullets draped around her like a soldier from the Mexican Revolution came organically. So did the introduction of the revolutionary character Adelita, played by Venezuelan actress Carla Baratta, modeled after the Mexican Revolution female soldiers known as “las adelitas.”

The debut of the show at a time when immigration and President Donald Trump’s rhetoric attacks of Latinos are consistently in the news was pure coincidence, James and Sutter said. Although both say they are seeking to humanize people who live on the border and those who are members of motorcycle clubs.

That humanizing effort comes without romanticizing that some motorcycle clubs are linked to a dangerous world, the creators said.

Last year in New Mexico, for example, police in tourist friendly Santa Fe were forced to increase patrols and surveillance amid tensions between two Latino motorcycle gangs — the California-based Vagos and the Texas-founded Bandidos — that sparked a drive-by shooting and a hospital lockdown.

“The show is not for everyone,” Olmos told the AP. “It’s dark. It’s powerful.”

Still, Olmos said he enjoyed working with Sutter and James and the largely Latino cast to tell a story that will take viewers on an emotional journey.

“All I can say,” Olmos said, “is that it’s heartbreaking.”